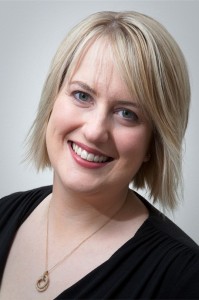 Contemporary romance novelist Louisa Edwards is one of the romance community’s rising stars—a status she’s cemented with the release of her latest novel, Hot Under Pressure, which is the last in the Rising Star Chef series.

Louisa’s books are smokin’ hot, but more than just delivering high-quality romance novels, she also gives readers delicious recipes. And, having met her in person and hung out with her online for a long while, I can also tell you she’s a wonderfully warm, funny woman—qualities which shine through her writing.

She’s giving one commenter a copy of Hot Under Pressure (see details below). I’m so happy to welcome her here today. Welcome, Louisa!

Thank you so much for having me! And for the lovely introduction. I’m thrilled to be there!

1. Beck, the hero of your latest release Hot Under Pressure, is a mysterious man throughout the series. How much of his story did you have worked out when you started writing the first in the series, or did he reveal himself slowly to you just as he did to his workmates?

Actually, I knew almost nothing about Beck when I started the first book, other than that he was going to be the hero of the third book. There was a period where I was just like Win, the curious, gossipy line cook who spends a lot of time speculating about Beck’s background. Was he an ex-con? In witness protection? An exiled prince of some foreign land?

But it didn’t take very long to figure out that Beck, super disciplined, focused, loyal, used to cooking for large crowds—Beck was in the military. Until I introduced Skye in SOME LIKE IT HOT, however, I didn’t know the rest of his history…

Honestly, my favorite is HOT UNDER PRESSURE, with TOO HOT TO TOUCH a close second. I just adore those guys, the colors, and the kitchen backgrounds.

3. I love the characters you create, and you’re one of the only writers who creates secondary characters that I’ll actually read about (I usually skim over secondary stories). I love that you choose really challenging secondary couples—the most recent is an older businesswoman and younger rock star. What can readers look forward to in the near future?

My new series will have a secondary plot line, and heaven knows it’s also pretty challenging (at least to me!) but it’s more focused on the tricky, multi-layered push and pull of family relationships. In the first book, which I’m in the middle of writing now, it’s about the heroine’s slow realization that her estranged mother has really turned her life around, and that they both deserve a chance to forge a new connection.

4. Each of your chef heroes has a different kitchen talent. Max Lunden has studied food around the world and can create amazing global cuisine. His brother Danny is a pastry chef capable of the most sumptuous desserts. And Beck can whip up a hearty meal for hundreds of hungry people. If you could bring only one of them alive for a day to cook for you, who would you choose?

Oooh, tough one. If I’m honest, I’d probably choose Danny—mostly because, while I love to cook ethnic food myself and I throw a pretty mean dinner party, if I do say so myself, I’m not the world’s greatest pastry chef. I don’t have the attention to detail, the patience, the ability to be creative within a very specific set of rules—and Danny is the master of all that! But…can I bring Max alive to make me laugh, and Beck to make me swoon?

5. One of my favorite memories was of landing in New York last year on the night the Marriage Equality Act was passed, and then going to gay pride a couple of days later. The joy was overwhelming, and my cheeks ached for days from smiling so hard. Will your characters Frankie and Jess have a chance to celebrate their own union now?

I love you for this question. I happened to be in NYC that night, too—as a matter of fact, in a piano bar in Chelsea, drunk on show tunes and happiness—and it’s an experience I’ll never forget. My current plan is actually to listen to the many, many readers who’ve written to ask for more of Frankie and Jess! I want to write a novella-length epilogue to the first trilogy…and I’d like it to be a double wedding story. I don’t want to spoil it! But you can probably guess which couples are tying the knot..

6. I loved that Too Hot to Touch changed Brussels sprouts’ undeserved icky reputation. My husband makes absolutely delicious sprouts—sautéed with pecans! What other food would you reintroduce people to if you had a chance?

Oooh! I’m going to have to get that pecan recipe from you. Living in Austin now, we eat a lot of pecans. I love changing people’s perceptions of foods by cooking things they think they don’t like, but in a whole new way. But if I could be an evangelist for one single culinary concept, it would be to convince home cooks that cooking from scratch can be just as simple, usually less expensive, and is ALWAYS a hundred times more delicious and healthful than cooking out of a box.

7. I hear that next year you’re bringing out a new series under a new name, Lily Everett. Spill the beans! And do you have any more cooking series planned?

Don’t worry! I definitely plan to keep writing my culinary romance—I still adore my chef heroes! But right now, I’m completely in love with my new Lily Everett series. I’m putting it out under a different name to keep from disappointing readers who would expect any Louisa Edwards book to have food in it, and also because it’s a slightly different kind of book—even more focused on the family relationships (which I’ve always been drawn to writing about) and set in a warm, quirky small town on an island off the coast of Virginia, near where I grew up. And I’m head over heels for my hero, a smart, tough, wounded guy with scars, both inside and out, who has been working hard to overcome his dark past…but it’ll take the heroine’s help to coax him all the way back into the sunlight. It’s called SANCTUARY ISLAND, and it should be out in late spring of next year.

Louisa’s giving away a signed copy of Hot Under Pressure and a set of her Rising Star Chef romance trading cards to one very lucky winner! Leave a comment here, and I’ll randomly choose someone on Tuesday May 22nd.