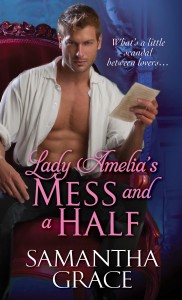 Lady Amelia and Jake Hillary have a complicated history. They’ve loved each other for years, but Amelia married Jake’s best friend, Audley. After Audley’s death, Jake and Amelia shared a passionate kiss, but then Jake disappeared to take care of family issues…and his family meddled in their relationship.

Years after they should’ve gotten together, Jake and Amelia finally have a chance to clear the air of all the misunderstanding and malicious acts that have kept them apart.

But just when it looks like they’ll be able to have their richly deserved happily-ever-after, two things conspire to ruin their chance for happiness. First, Jake has difficulty accepting Amelia’s promiscuous best friend. And once he comes to accept her friend, Amelia receives troubling news that she may not be a widow after all, making any marriage to Jake bigamous.

Samantha Grace debuted earlier this year with the first book in this series, Miss Hillary Schools a Scoundrel, which features Jake’s sister Lana. I said in my review that it was full of  fun, feisty characters who are as adept at teasing each other as they are at waltzing.

Lady Amelia’s Mess and a Half continues in that vein – though some of the men seem considerably less adept at waltzing.

Samantha Grace has a wonderful way of highlighting the small, intimate moments that make characters more human. I particularly loved this scene, after Amelia reads a children’s book to a group of orphans at the foundling hospital she’s raising money to restore. While she reads to the kids, Jake entertains them by acting out the story in pantomime, and the kids beg him to return the next time she reads to them.

“Nothing could keep me from returning next week.” He lifted his imaginary sword. “Not vicious dragons, nor wild beasts of the forest, nor – ”

“That is quite enough for tonight, sir.” Despite her reprimand, Amelia grinned at him over her shoulder.

The nurses ushered the children from the drawing room to prepare them for bed. Their noisy chatter faded as they moved farther away. He and Amelia were alone and would see themselves out.

He offered her a hand up. She stood and wrapped her arms around his waist, laying her cheek against his chest.

“You shall be the finest of husbands, Mr. Hillary.” Her warm breath penetrated his waistcoat.

“I shall try to be,” he promised then placed a kiss atop her silkly hair. He would cherish her, love her with reverence, and protect her as a doting husband should. Nothing would stop him.

No creature great or small.

Samantha Grace adds a delightful, quirky voice to the Regency romance world, and I was really pleased to spend more time with the wonderful Hillary family.

Have you read any of Samantha Grace’s novels? What did you think?

2 thoughts on “Review: Lady Amelia’s Mess and a Half by Samantha Grace”