The Officer Says “I Do” by Jeanette Murray 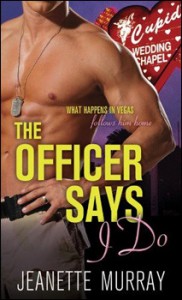 Captain Tim O’Shay is a bit uptight. Okay, make that a lot uptight. Always the sober, responsible one among his friends, he decides to let loose for once on a guys’ trip to Vegas. Winning a few hands goes to his head – as do the shots he normally wouldn’t touch, and the sexy woman he feels an immediate attraction to. So he gives in to several temptations. What could go wrong, right?

Tim wakes up married. Not just married, but married to a free spirit who grew up on a commune. Totally not his usual type, and not what you – or his commanding officer – would think of as “Officer’s Wife” material.

But his wife Skye believes strongly in fate, and she believes that’s what drew them together in an attraction neither could resist. And the attraction’s still there once the ink’s dry on the marriage certificate, so they decide to give it a chance. Because with everything else going wrong, something has to go right. Right?

I thoroughly enjoyed The Officer Says “I Do”. Tim’s a sweet, caring man who wants to take care of his family and friends, advance in his career, and be the best Marine he can be. He’s an intriguing, realistic mix between alpha and beta. This is certainly no grunting, chest-beating warrior. He’s a strong man who’s willing and able to make sacrifices for the people and things he loves.

Skye is equally willing to make sacrifices. She may have grown up on a commune with a couple of aging-hippie parents, but she’s hardly a stereotype. She’s warm, passionate, and devoted to discovering whether her impulse marriage could become the real deal.

The thing I love most about this book is how realistic it is. Okay, so the setup is far-fetched (or maybe it’s not. I’d probably be shocked by how many drunken Vegas weddings there are). But the story follows two multi-layered characters as they try to figure out how to make a relationship work, and what they are and aren’t willing to sacrifice for that to happen. As Skye struggles to turn herself into a “perfect” officer’s wife, and Tim struggles to show her that he loves her the way she is, the two learn just as much about themselves as they do about each other.

And you can’t get a more beautifully realistic picture of marriage than that.

Have you read any of Jeanette Murray’s books? What did you think?

3 thoughts on “Review: The Officer Says “I Do” by Jeanette Murray”