Susannah Sandlin is an author of paranormal romance set in the Deep South, where there are always things that go bump in the night! She’s also one of my critique partners, and I’m so excited to have her here today talking about the oh-so-good bad boy hero of her debut paranormal romance, Redemption. See below for giveaway details. Take it away, Susannah! 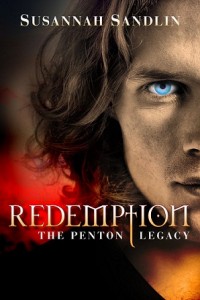 We love our bad boys. Romance books, from contemporary to paranormal, are full of alpha males being brought to their knees by finding the one woman who turns those knees (and hopefully nothing north of there) to jelly.

(Now, in real life, most of these dudes would either be some woman’s worst nightmare or a semi-permanent resident of a prison or anger-management class, but that’s another blog for another day.)

I wanted Aidan Murphy, the hero of my new paranormal romance Redemption, to be an alpha male. But it became clear as I wrote the book that next to his best friend Mirren, he was going to be a different kind of alpha.

Mirren snarls at people, where Aidan listens. Mirren’s nickname is The Slayer; Aidan is just, well, Aidan. Mirren doesn’t much like people; Aidan has decent social skills. Mirren acts; Aidan thinks first, then acts. (Sometimes he thinks too much.) Mirren’s hobby: taking machines apart and putting them back together. Aidan’s? He grows night-blooming exotic plants.

Aidan is a very good leader. So is Mirren—they just take different routes. (Oh, and did I mention they’re both 400-year-old master vampires from Ireland and Scotland, now living in a small town in Alabama?)

“What the hell are you?” Krys scratched Aidan’s cheeks with her nails, drawing blood again, and kicked at his shins, hoping he would move away from the door so she could run. He didn’t say anything, just planted a hand on each of her shoulders and watched impassively while she fought and scratched.

Finally, when she thrust a knee into his crotch as hard as she could, he reacted, grunting and twirling her around till her back was pressed against him. He had one arm clenched around her waist and the other across her shoulders as she continued to fight. “It’s OK,” he said. “Fight it out. You’ve earned it.”

Insufferable, condescending bastard. She kicked backward at him, which dislodged him a fraction, but not enough to make him release her.

She couldn’t do it. No matter how hard she struggled, his grip remained tight. Finally she accepted that her struggle was futile. He’d won. Her shoulders slumped in defeat, her breath as ragged as if she’d run a marathon. Her fight drained away and the tears started. Damn it―she did not want to give him the satisfaction of making her cry.

He continued to hold her against him, lowering his head to tuck his cheek against her hair, swaying slightly and talking softly in a language she didn’t recognize except in its tone―the one used to soothe a child. It shouldn’t have calmed her, but her heartbeat slowed.

His breath was warm in her ear. “Will you let me explain?”

Aidan might not be your mama’s alpha male, but he still can be brought to heel by the right woman. (And what of cranky old Mirren, you ask? Well, he’s the hero of book two, Absolution, coming in October.)

Would you like your favorite fictional alpha male in real life? My favorites are probably the alphas of JR Ward’s Black Dagger Brotherhood and, in real life, they’d scare the crap out of me…although I might stalk them just so I could look at them.

Leave a comment before Tuesday July 3rd for a chance to win a copy of Redemption!

REDEMPTION by Susannah Sandlin
Following a worldwide pandemic whose vaccine left human blood deadly to vampires, the vampire community is on the verge of starvation and panic. Some have fanned into rural areas, where the vaccine was less prevalent, and are taking unsuspecting humans as blood slaves. Others are simply starving, which for a vampire is worse than death—a raging hunger in a creature too weak to feed.

Immune to these struggles—at first—is Penton, a tiny community in rural Chambers County, Alabama, an abandoned cotton mill town that has been repopulated by charismatic vampire Aidan Murphy, his scathe of 50 vampires, and their willingly bonded humans. Aidan has recruited his people carefully, believing in a peaceful community where the humans are respected and the vampires retain a bit of their humanity.

But an unresolved family feud and the paranoia of the Vampire Tribunal descend on Penton in the form of Aidan’s brother, Owen Murphy. Owen has been issued a death warrant that can only be commuted if he destroys Penton—and Aidan, against whom he’s held a grudge since both were turned vampire in 17th-century Ireland. Owen begins a systematic attack on the town, first killing its doctor, then attacking one of Aidan’s own human familiars.

To protect his people, Aidan is forced to go against his principles and kidnap an unvaccinated human doctor—and finds himself falling in love for the first time since the death of his wife in Ireland centuries ago.

Dr. Krystal Harris, forced into a world she never knew existed, must face up to her own abusive past to learn if the feelings she’s developing for her kidnapper are real—or just a warped, supernatural kind of Stockholm Syndrome in which she’s allowing herself to become a victim yet again.

Redemption is $3.99 this week for Kindle. Also available in trade paperback and audiobook