I lived a five-minute walk from the Tower of London for five years before I ever ventured inside. It’s really expensive, and I told myself I got the best of it by being able to walk past it every day on my way to work.

How wrong I was.

A couple of years ago I found out that residents of the London borough Tower Hamlets could get in for 1 pound. So Smarty Pants and I went, and we were completely blown away.

Last week I took my parents there, and though I had to pay full price this time it was still totally worth it.

The first thing hits you when you pass over the drawbridge and into the Tower complex is the size. It looks big from the outside, but you really have no idea until you get inside how huge it is. It’s a village.

And it’s so full of stories that it’s a fertile place for writers, readers and anyone with an imagination. Even the birds have a story. Legend has it that the kingdom will fall if the ravens ever leave the Tower, so the Tower is required to keep six ravens at all times. Right now they have eight, just in case.

The best part of the Tower is the tour by one of the Yeoman Warders, aka Beefeaters. They keep the Tower running. The guy who showed us around was the Ravenmaster – the ravens’ primary carer (he said, “I’m the only man in the world who can whistle and get eight birds into bed at once.”). It’s a job he can do because he lives there. 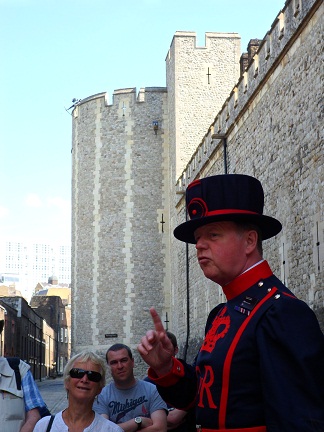 That’s right. He lives in the Tower of London. In fact, all of the Yeoman Warders do.

Forty-five families live within the Tower’s walls. They are their own community. They have their own clubhouse. And every night at 10pm, they’re locked inside the grounds of the Tower, just as their predecessors have been for centuries. Our Beefeater joked, “At 10pm every night, I know exactly where my 17-year-old son is. He loves it.”

To become a Yeoman Warder, you have to have been in the British military with a good record for at least 22 years. So all of the guards are former soldiers.

Even with all of the fascinating historical stories of famous and gruesome executions I heard at the Tower, and even with the exhibitions of the Crown Jewels and historical armor, the story I was most interested in was of the Yeoman Warders and their families.

I would love to read a book about them. Anyone know of one?

Have you been to the Tower of London? What did you enjoy most about it? Do you know of any books about the Yeoman Warders?

14 thoughts on “A peek inside the Tower of London”