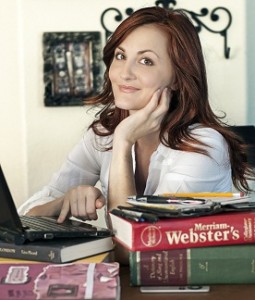 Moriah Densley is an author I admire the dickens out of. Her debut novel – a historical romance with a very unusual hero – came out earlier this year, and this week her first paranormal romance is hitting the digital shelves, and she’s giving you a chance to win it.

You can read the interview I did with her earlier this year here, but today she’s introducing us to Jack and Cassie, the incredible hero and heroine of her latest novel, The Valkyrie’s Guardian. See below for giveaway details.

Take it away, Moriah!

I loved writing an “opposites attract” story. Tough jock gets geek girl. Jack MacGunn is a Scottish berserker warrior who works for the Navy SEALs when he’s not on bodyguard duty for Cassiopeia Noyon. Posh, bratty—a sexy librarian fantasy. Jack can’t decide if he wants to throttle her or kiss her.

Cassie can’t figure out why Jack’s been trying his bad pick-up lines on her: “Here, you take my lollipop, and I’ll improvise.” Flirting? Immortal, dazzling Jack is oh-so out of her league, isn’t he?

No wonder my hero and heroine spend most of the story mixing attraction with fighting. In the following excerpt, Jack is in trouble with Cassie, again. The night before, in a moment of honesty, Jack confessed his feelings and gave her a kiss that curled her hair. Not to mention her toes. When his boss—her grandfather—catches them, Jack promises he has no intention of pursuing Cassie.

How does she handle the rejection?

Cassie nearly jumped when Jack’s arms reached around her to drop a peeled banana into the blender. He hooked one arm around her waist as he leaned to pull a handful of wheat grass growing in a windowsill pot. The grass went into the blender, as well as a scoop of bran, which required him to press his hips into hers to reach the canister.

She sliced fresh avocado and he purred in approval, an overtly sensual sound right in her ear. Cassie remembered being entertained as a kid by Jack’s lifelike animal noises, but the jungle-cat-purring against her neck now made her want to stretch out on the counter and arch her back. Still, she feigned nonchalance.

She scoffed as he drew his KA-BAR from his pants to cut coconut chunks. Couldn’t he use a sanitary kitchen knife? Blueberries and carrots went in the blender as his knee rubbed the inside of her thigh—he was trying to coax her into submission. Persuasive, but she couldn’t let him blow hot and cold and think she would still be at his beck and call. Girls who did that got into all kinds of trouble.

He poised his hand over the top of the blender, ready to crack a raw egg when Cassie cracked first. “Gross, Jack! I draw the line there.”

He reached for the blender again. “You won’t even taste it.”

“No egg!” She blocked the top with her hands. “See? The smoothie already looks disgusting. No reason it should stink too.”

She realized the revolting sewage color would be lost on colorblind Jack, who probably saw an indeterminate shade of gray-blue. He dropped in five more peels of lemon rind and two pinches of cinnamon.

“Back off, you’re ruining my smoothie.”

“I like these pants, Cass.” He ran his fisted hand down the outside of her thigh and back up, thankfully without breaking the egg. He teased it over her navel, tracing in circles with a more facetious mood than seductive.

“I think you’ll change your tune.”

“Wishful thinking, Jack. And I’m not just talking about the egg.”

What surprised me in developing Jack and Cassie’s story was how the characters didn’t quit giving each other a hard time even after they fell in love. A heroine with a medical degree and a classic Greek novel in her purse isn’t going to understand why the hero likes “extreme cliff diving.” Still, Jack would give his life for Cassie, and she makes him feel like everything is right with the world. Not to mention once she starts kissing him, she can’t stop. It’s true—opposites attract.

The Valkyrie’s Guardian by Moriah Densley 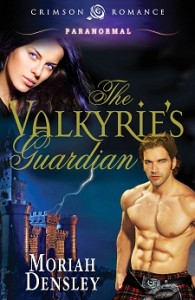 You might call them superheroes. “Extra-sentients” are one in 4.5 million with the extraordinary ability to unlock the full potential of the mind.

Cassiopeia Noyon is descended from the most powerful known extra-sentient, but she’s a dud – no impressive talents except a healing ability which lands her in trouble. She’s all wrong for Jack MacGunn, her dazzling immortal berserker bodyguard.

Cassiopeia Noyon has a medical degree at age twenty-one, which makes her a total loser … for an extra-sentient with merely superhuman strength and healing powers but not much else. Cassie may not even be immortal, which is a downer since the man she’s adored since age six, is.

Jack MacGunn is King of the Bad Pick-Up Line. A true blue kilt-wearing, pipe-playing Scot descended from a long line of berserker warriors; if he’s awake, he’s either hungry or itching for a fight. Lately Jack feels lost. His career as a Navy SEAL detachment agent is on a slow train to nowhere. He suspects it has something to do with his out-of-control superhuman rages.

The one task Jack has never failed at is guarding Cassie from their enemies, but now he fears he can’t protect her from himself. Even if they could go a single day without fighting, Jack knows he’ll never be good enough for her. The boss’ granddaughter is off-limits anyway.

A chance encounter with a villain long assumed dead sends Jack and Cassie on a race to save the children secreted away at Network One, the academy for genius extra-sentients. Jack discovers a new side of Cassie when in the heat of combat she invokes unheard-of powers. Has Jack finally met his match?

Moriah Densley sees nothing odd at all about keeping both a violin case and a range bag stuffed with pistols in the back seat of her car. They hold up the stack of books in the middle, of course. She enjoys writing about Victorians, assassins, and geeks. Her muses are summoned by the smell of chocolate, usually at odd hours of the night. By day her alter ego is your friendly neighborhood music teacher. Moriah lives in Las Vegas with her husband and four children.

Read chapter 1 of The Valkyrie’s Guardian for free

Buy The Valkyrie’s Guardian on Amazon

Moriah’s giving away a digital copy of The Valkyrie’s Guardian to someone who leaves a comment here. I will randomly choose a winner on Tuesday October 30, 2012. Just let us know: What’s the most opposite trait that attracts you to someone – whether it’s a lover, a friend or someone you admire?