Julianne contacted me to say that since this interview had received so many comments, she’d like to give away THREE copies of Princess in Love – that means three winners! Thanks so much, Julianne! 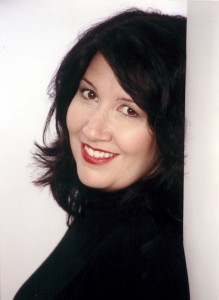 Julianne MacLean ditched a career in accounting to pursue one as a historical romance author—and the romance community is truly glad she did! She’s a bestselling author who’s written about American heiresses, Scottish lairds and—most recently—royalty from a fictional country. She’s here today giving away her latest novel, Princess in Love. Welcome, Julianne!

1. Your royal trilogy, of which Princess in Love is the second novel, is set in a fictional country called Petersbourg during the Regency period. Tell us more about Petersbourg and its royalty.

I wanted to create a full historical world with lots of drama, so I looked to a particular period that has always fascinated me – the Russian Revolution. I used that to inspire the turbulent history of the country, and the first book BE MY PRINCE has a hint of Anastasia’s story in it, where a long lost princess resurfaces many years later. I have imagined the country to be small like Luxembourg, near the Netherlands, so I called it Petersbourg to give a hat tip to Russia.

2. You say that Charlotte Brontë is your most effective guidance counselor ever. I love this description! Can you tell us more about this? 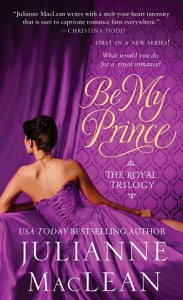 When I enrolled in university, I didn’t know what path to take or what to major in, but I was fortunate enough to have a first year English professor with a great passion for literature. He introduced me to the Brontës and Jane Austen, Edith Wharton and Henry James, and from then, I was passionate about literature, too. I became hooked on broody heroes like Rochester and Heathcliff. Imagine my delight when I finished my degree and discovered the historical romance genre for the first time!

3. What is the best thing about being a full-time romance author? What’s the most challenging?

The best thing is being able to pour my whole heart and soul into my work—which is to tell love stories about passionate people. I feel very lucky that my passion is my job. The most challenging part is to stay focused on that and not get too caught up in the publishing “biz” – which involves promotion and websites and social media, etc. I enjoy that, too, but it’s important to remember that the characters and their love stories have to come first.

4. I love the fun facts on your website – especially the one about you being a DJ at a dance club during your university days! I was a DJ my freshman year of college, but for my campus radio station playing contemporary Christian music (something I knew nothing about!). What’s one song that never fails to get you on the dance floor?

What a fun question! Oh, how will I choose?? Okay…if it’s an eighties song – I’ll pick “Can’t Get There From Here” by R.E.M. If I’m going to pick a current song, it’ll be “On the Floor” by Jennifer Lopez.

5. Can you tell us who will be the hero and heroine of the final book of your royal trilogy?

Yes! Nicholas is the bad boy – the wayward son of the king who is always at the center of a scandal – (usually involving a woman), but he meets his match when he is kidnapped by a seductive French spy who lures him out of a ball. 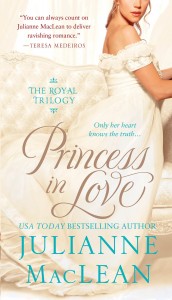 She’s engaged to be married—to the wrong man…

Leopold Hunt, Marquess of Cavanaugh, is a secret Royalist with a distant hereditary claim to the throne. He has been groomed to one day overthrow the king and rebuild his family’s dynasty. Only one thing stands in his way: the king’s daughter, Rose.

Princess Rose has loved the marquess her entire life, but she is about to enter a political marriage—one that promises to help keep her father in power. There is virtually no way for Rose to escape her fate…yet she cannot resist the unstoppable passion she feels in the arms of the handsome and charming marquess. When a dangerous plot unfolds and puts their love to the ultimate test—Leopold must make a desperate choice: To honor his family or follow his heart….