My long-time readers will remember that last year I shared videos of the absolutely lovely Ben Cohen dancing on Strictly Come Dancing (the British version of Dancing With The Stars). Despite being profoundly deaf, he took on the challenge of learning how to dance ON NATIONAL TV to raise awareness of the Ben Cohen StandUp Foundation, which does amazing work to combat bullying and promote equality. Brave, brave, brave.

I was lucky enough to meet Ben a few weeks ago, and he is genuinely kind and funny. I’ve done some volunteering for his foundation, and I highly recommend them if you’re looking for a charity or foundation to support. (You can now preorder his 2015 calendar in the U.S. and in the U.K. It has a centerfold and would make a perfect Christmas gift for your friends, sisters, mom, or your favorite rugby-loving romance novelist. Just sayin’.)

Should we remind ourselves of his dances? Why the hell not? Here he is doing one of my favorite routines.

That right there is a romance novelist’s DREAM COME TRUE.

This year there’s a new gorgeous rugby player strutting his stuff across the Strictly stage, which means…weekly videos!

Ladies and (perhaps one or two) gentlemen, meet Thom Evans.

Not hot enough for you? Try this one.

Be honest: How badly do you want to be Iveta in that video? I’d happily get into distress at that beach.

We all know I’m a sucker for a man with a nice accent, so let’s hear Thom speak. Here he is in his first week of practice, showing off his good humor and his ability to bite his tongue when a beautiful woman tells him not to deflate.

Thom Evans played for Glasgow Warriors and Scotland until a horrific neck injury ended his rugby career when he was just 24. I wanted to show you what Thom has overcome because I think it’s incredible. Warning: This interview from a few years ago shows the moment he got injured. It’s not bloody, but it made me feel sick — especially when they showed his mum in the audience. I can only imagine how she must’ve felt.

What an inspiration to suffer such a terrifying injury and come back to perform the physical feats that Strictly will require. Thom is now a model (because, seriously, wouldn’t you be?) I wonder if he would ever consider modeling for a rugby-themed romance novel cover. Hmmm…

Weirdly, when I had just sent in the final draft of Tempting the Player to my editor, I went to Pinterest and built a board for the book. I never have real people in mind as I’m writing, but after I finish writing I like to build pin boards that keep me inspired during the long wait between turning in the draft and finally seeing it published. Looking for someone who might resemble my hero, Matt Ogden, I typed in a highbrow search term (“super sexy rugby players”) and Thom Evans came up. (So did Ben Cohen, unsurprisingly.) I don’t remember ever watching Thom play, but as soon as I saw his photo I thought, “That’s Matt!”

Ready for more hotness? Grab a fan, ladies and gents.

Thom, best of luck in Strictly. You seem very sweet in your interviews, and I hope you stay on my TV screen for a very long time. 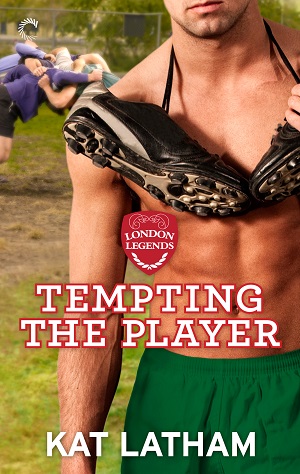 For those of you who are eagerly awaiting Tempting the Player, it’ll be here in just over a month! You can preorder it now, but how about I share a little teaser?

Here’s what you need to know. Matt Ogden is a professional rugby player whose career has hit the skids. Part of the problem is his debilitating fear of flying. Every time he has to fly for a match, he suffers a panic attack that leaves him worthless on the rugby pitch. Desperate to save his career, he asks his best friend, Libby Hart, to teach him how to fly. She’s a commercial airline pilot who’s been in love with Matt since they first met. They live in the same building and even share custody of a teacup Chihuahua, but Libby has had to settle for being just friends.

In this scene, Matt’s team has left him behind in London. Libby finds a way to console him (in the shower) and then takes him and their dog Princess to the airfield where her dad’s four-seater Piper Warrior plane waits for them.

He held Princess’s crate in one hand and grabbed Libby’s hand with the other. He tried to muster a smile but feared it was more a gurn than a grin. “I can do this.”

“I know you can.” She squeezed his hand and led him to Piper, and he set Princess down. This time, Libby didn’t talk him through all of the preflight checks. They didn’t have time to make this a lesson. But he followed behind her and ran his hands over Piper, doing his own inspection as Libby did her much more thorough one.

When she was finished, she untied the plane and slid her arms around Matt’s waist. “This flight might be a little different.”

“You mean because it’s pitch-black out? Or because we’re going to cross the Irish Sea? Or the fact that my team have no idea I’m going to turn up—if I even manage to do this without passing out—and when I get there I’ll probably find out my contract’s being suspended earlier than I think?”

Her brows drew down. “Your contract?”

“It’s this piece of paper I signed saying I’ll play rugby in exchange for money.”

Libby tried to pinch his back, but her fingertips just slid over his suit jacket. “Damn it,” she muttered, “you’ve got, like, no body fat.”

“Cheers. I’ve been working out.”

She rolled her eyes. “Tell me more about your contract.”

“It’s up for renewal at the end of the season—if I make it that long.”

Squaring her shoulders, she made herself as big as a shortie could. “You’re going to make it that long. You’re getting in this plane with me, we’re flying to Ireland, and you’re going to talk to your coach. He can’t get rid of you just because you have a phobia. I don’t know anything about employment law, but I’m sure that’s against it.”

Matt wasn’t so sure, but he also wasn’t going to argue with her. “Then let’s get going.”

They climbed into the plane, strapped Princess’s carrier into the backseat and all too soon had clearance for takeoff. But before Libby advanced the throttle, she slid her hand over his thigh. Suddenly, he was right back in his shower with her kneeling between his feet, rubbing his quads as she gazed up at him and told him more with her eyes than she’d probably wanted to.

“You’re so tense,” she said. “This’ll sound stupid, but maybe it’ll help if you find a happy place during takeoff.”

“Hart, I’m tense because you’re stroking my leg. If you want me to find a happy place, keep on stroking.”

Who’s watching Strictly Come Dancing? Do you have a favorite couple yet? Who’s looking forward to Tempting the Player? And how cute is Thom Evans?

2 thoughts on “Videos: Another hot hot HOT rugby player will waltz his way into your heart”