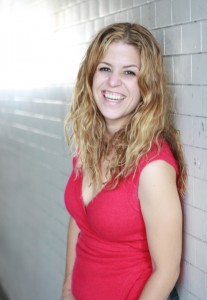 Today I’m so pleased to get a chance to chat with Megan Crane, author of Bachelor Auction book #5, In Bed with the Bachelor — which just came out today! Welcome, Megan, and congrats on your latest release!

1. Tell us a little about the hero and heroine in In Bed with the Bachelor.

Jesse Grey (nephew of Jason Grey, proprietor of Grey’s Saloon in Marietta) has pretty much been in a bad mood ever since his father stole his girlfriend three years ago, and is positive nothing could ever change his stance on No Love, Ever.  Michaela Townsend, by contrast, thinks she has her life together.  Great job, great fiancé, great everything.

Naturally, they’re both wrong.  All it takes is getting stuck in a snowstorm to see it!

2. How does Michaela end up buying Jesse?

She doesn’t.  Her interfering relatives have banded together to buy him, and not even for her—they think Jesse, with all his noted business acumen, can help Michaela’s fiancé who they aren’t all that fond of.

There’s that little wrinkle of her being engaged to another man, though Michaela and her fiancé have a bit of an unconventional relationship…

4. Is In Bed with the Bachelor related to any of your other books?

Jesse Grey is one of the Grey cousins, all related in one way or another to surly Jason Grey, who runs Grey’s Saloon and has appeared in a lot of Montana Born books—not just mine!  Jesse’s father and wife (who happens to be Jesse’s ex—ouch) appeared in Come Home For Christmas, Cowboy, which featured Jesse’s cousin Christina and her husband, Dare.  It’s not at all necessary to read anything else before this one, though.

I live in Los Angeles, so I’ve been a little bit closer to celebrities than many, and I’d have to say that I wouldn’t want to do this.  At all.  I’d want to go on a date with my fantasy version of whichever star, not the actual person.  That’s destined to end in tears.  Mine, probably!  It occurs to me that this is why I wrote a Bachelor Auction novella that’s all about seeing beneath the surface of things…

I wanted to be a writer when I grew up.  I still can’t believe that dream came true!  (I also wanted to be a Broadway star, but you know, you can’t have everything.)

A little studio apartment in Manhattan.  Or maybe a cottage in Cape Cod.  Or maybe a little getaway in Wanaka, New Zealand.  Hmm.  Maybe I need to win a lot of lotteries!

What’s the most beautiful place you’ve been to?

I recently saw a very cool trip to Antarctica that I’d absolutely love to take, with guest lecturers and scientists and amazing excursions and penguins, but it was laughably far outside my budget.  Someday!  Before it all melts!

Megan’s giving away the Marietta e-book of the winner’s choice. She’s asked me to randomly select three winners. Leave a comment below to enter!

In Bed with the Bachelor 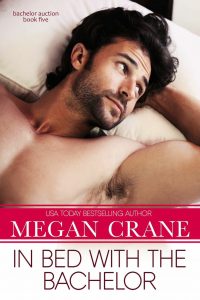 Our latest bachelor has enough family in Marietta to qualify as an honorary native, but hails instead from Seattle, WA, which is where he’ll fly you for a glamorous weekend on the shores of the sparkling Puget Sound.  Jesse Grey will treat you the way a local boy turned construction tycoon should: five star accommodations, gourmet dinners, and celebrated Washington wines.  We just can’t promise he’ll smile much.  Or at all.

Sold to the highest bidder!

Jesse Grey, notorious bachelor and one of Seattle’s foremost construction tycoons, has been roped into participating in the Marietta Bachelor Auction thanks to an expertly executed guilt trip laid out by his family.

Michaela Townsend already has a fiancé and certainly doesn’t need another man in her life. So when her family buys her surly, sexy Jesse at the auction and wrangles him into driving her from Montana to Seattle, she’s appalled yet disturbingly attracted.

As far as Jesse is concerned, Michaela is forbidden fruit. Even though he knows her fiancé isn’t all he seems, Jesse would never take what didn’t belong to him. But how long can he resist the one woman he shouldn’t touch?

USA Today bestselling and critically-acclaimed author Megan Crane has written more than 40 books from women’s fiction, chick lit, and work-for-hire young adult novels to Harlequin Presents as RITA-nominated Caitlin Crews. These days her focus is on contemporary romance, from her special brand of cowboys to sexy bikers and beyond. She sometimes teaches creative writing classes both online at mediabistro.com and at UCLA Extension’s prestigious Writers’ Program, where she finally utilizes the MA and PhD in English Literature she received from the University of York in York, England. She lives in California with her husband who draws comics and animation and their menagerie of ridiculous animals.