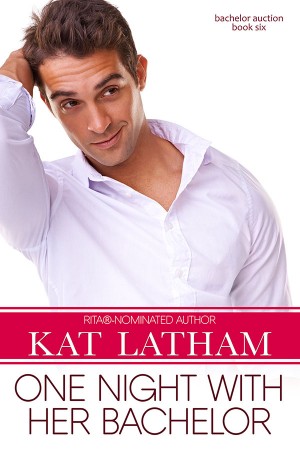 Friends, One Night with Her Bachelor hits ereaders today! I’m so excited to share this story with you. Some books are torturous to write (Taming the Legend, I’m giving you the side eye) and some almost seem to write themselves. One Night flowed so easily that I felt like it was special from the very beginning. I really, really wish all books were like that!

Since I interviewed all the other authors in the Bachelor Auction series, I thought I should probably do the same for myself. See below for giveaway details!

1. Tell us a little about the hero and heroine in One Night with Her Bachelor.

Molly’s a single mom and a kindergarten teacher. She’s known for being one of the nicest people in town, but she finds it tough to ask people for help when she needs it–and boy, does she need it. Her ten-year-old son, Josh, suffers a terrible accident, and Molly’s bills start piling up, so her best friend organizes a bachelor auction to raise some money for her.

Gabriel used to be an Air Force pararescueman (the guys who do combat search and rescue), but a helicopter crash ended his career. He’s at a loss when it comes to what he should do next. When he gets roped in to being auctioned off, he ends up being bought for Molly, the one woman with a chance in hell of getting through to him.

2. How does Molly end up buying Gabriel?

She doesn’t, but I’m not going to tell you who does because it’s a little bit of a surprise.  I will tell you it’s one of my favorite scenes in the book, though. 🙂

Molly’s got a HUGE amount of stress in her life, and Gabriel doesn’t want to be one more burden on her. He wants to make her life easier, and he finds lots of sweet ways to do that, but he knows that having a relationship with him would give her a lot more to worry about. He has secrets, you see…and I’m not going to spill them here.

4. Is One Night with Her Bachelor related to any of your other books?

It is! Gabriel has a twin sister, Camila (heroine of Taming the Legend, coming May 11) and two older half brothers: Wyatt (Two Nights with His Bride, coming June 8) and Austin (title and date TBD). Their family situation is complicated. Their mom was married and had Wyatt and Austin first, but when they were toddlers she had an affair and got pregnant with Gabriel and Camila. The four kids didn’t always get along with each other, but they’ll become closer and closer as the stories progress.

Most people who know me probably think I’d go for a rugby player, but I’m very happily married to the only rugby player I need. (Though he’s more of a rugby watcher these days.) So I’d go for chat-show host Graham Norton because he can put anyone at ease, and I always got painfully shy and nervous when I went out on dates. Also, when I lived in London, I lived just around the corner from him. I used to see him walking his dogs and shopping at our local supermarket. So I know we could chat about dogs and the supermarket’s recent renovation. (Now do you see why I was crap at dating?) We’d go on a date to a spa somewhere in Ireland because I’ve been hunched over my computer so long that all I can think about is getting a massage.

I’m giving away a $10 bookstore gift certificate to one person who leaves a comment. I’ll announce the winner on Monday, April 6. Good luck!

One Night with Her Bachelor

Bid on a date with this wounded warrior for an unforgettable night of adventure. Aim high—and bid higher!—because no one comes close to local hero Gabriel Morales. 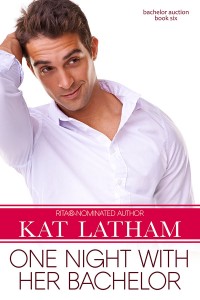 Molly Dekker hates being the town charity case, but when her son Josh is seriously injured she has no choice. She lets her best friend organize a bachelor auction to help pay her massive bills and make Josh’s life more comfortable. She can’t bid on any of the men, but a surprise bidder gives her a gift she never expected: a date with the man who saved her son’s life—the only one she’s in danger of losing her heart to.

Former Air Force pararescueman Gabriel Morales made a career of flying to the rescue, until a tragic helicopter crash stole more than his livelihood. Being auctioned off like a slab of beef isn’t in his recovery plan. But one look, one touch and one night unlocking Molly’s pent-up passion make him realize how badly he needs to be rescued…and how badly he wants to rescue Molly right back.

Will Molly and Gabriel’s never-quit attitude have them rushing head-first into love? Or will Gabriel’s secret pain stall their relationship before it can get off the ground?

Buy it at Amazon.com | Amazon UK | Amazon Can | Amazon Aus | iBooks | Kobo
It should also be available on Nook and Google Play soon.

Happy release day, Molly and Gabriel! I’m so glad the world can finally read your story. 🙂

Goodreads reviews for One Night with Her Bachelor

21 thoughts on “Release day party for One Night with Her Bachelor! *throws confetti*”