I hope you all had a wonderful holiday season full of tasty treats, good books and even better times with friends and family. This was the first Christmas my daughter Doodle Bug was old enough to comprehend what was going on, and I had so much fun doing crafts and reading Christmas stories with her.

I wanted to say thank-you to all the readers who discovered my books in 2015 and took the time to email me, chat with me on Facebook and Twitter, and leave reviews. It was an incredibly busy year. I published four books, had my website redesigned, put together two samplers of my books (which you can get for free by subscribing to my newsletter), oversaw the audiobook production for Unwrapping Her Perfect Match, and read a bunch of great romances. Somehow, I also managed to find time to get pregnant. 😉

So the first challenge of my new year will be to bring my new daughter into the world. She’s due on January 25, which is also my birthday, but she could arrive any time now. If you don’t hear from me much in the next couple of months, it’s because I’ve been working so hard that I’ve procrastinated on preparing for the baby. Whoops! Time to get Doodle Bug’s old baby clothes down from the attic and chain myself to the washing machine.

Given the fact that I have no idea what life will be like as the mom of two kids under three years old — and that I also have a day job — I’m trying not to commit myself to projects I might not be able to complete. BUT… there are two books I’m really eager to write, and I’m going to try my hardest to get them both out this year. Here’s a hint: 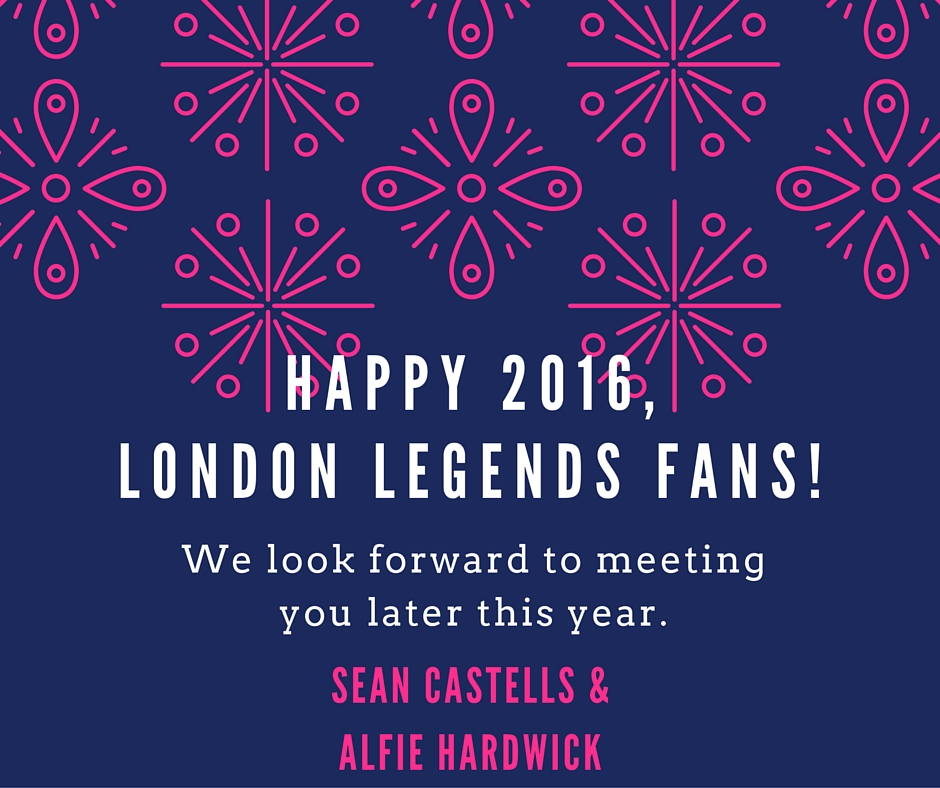 That’s right… two of my London Legends will (hopefully!) meet the women of their dreams (or maybe nightmares??) this year. They’ll both be familiar to those of you who have read Tempting the Player. In that book, Sean Castells was the hero’s cocky young rival on the team, and Alfie Hardwick is the player whose sudden tragic loss meant Matt Ogden had a chance at a starting position. They’ve both been on my mind a lot since I wrote Tempting the Player, and I’m really eager to write their stories. I’m not making any predictions about when I’ll be able to publish them, but my plan is to get them both onto your ereaders this year.

I’ve been doing more giveaways on my Facebook page, and I plan to continue because they’re so much fun. I hope you’ll join me there.

Also, right now The Book Queen is giving away the winner’s choice of her Royal Picks for December, one of which is Three Nights Before Christmas. Enter before January 3!

A street team and review crew

Over the last few months, several of you have approached me asking if I have a private group for readers who want to review my books or get more involved in promoting my books. I’m so humbled that you guys would want that!

I plan to launch a private Facebook group for my readers… but I don’t know when. Probably sometime after the baby’s born and I have my body and brain back again (that happens eventually, right??). If you’re interested, make sure you subscribe to my newsletter and blog and follow me on Facebook, because that’s where I’ll be posting more info.

That’s it for now! Thank you again for all your support last year, and I hope you all have an amazing 2016 ahead of you. I look forward to sharing the year with you!