Hello! Three Nights Before Christmas has been out for a little over two weeks, and I’ve been so amazed by readers’ reviews! Like these…

“If you are looking for Christmas miracles and a book that will make you feel really happy and good, I’d highly recommend Three Nights Before Christmas!”
—Harlequin Junkie, 5 stars (Top Pick)

“Kat Latham is easily becoming one of my favorite authors. It’s gotten to the point where I don’t even need to read the blurb before I one-click. I can’t wait to see what she has in store for me next!”
—Fiction Fangirls, 5 stars

Seriously, this book was tough to write, but reading things like that makes it all worth it.

Today’s Friday, so I’m here with some fun stuff for the weekend!

A quiz and giveaway 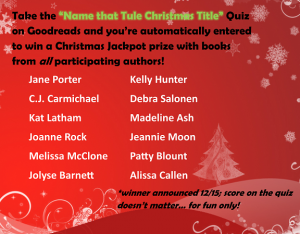 The lovely Joanne Rock put together a really fun quiz on Goodreads all about the holiday romance books from Tule Publishing (including Three Nights Before Christmas). Take a peek and play along… no matter your score, as long as you are logged into Goodreads then you’ll be automatically be entered in our Christmas Jackpot giveaway with a book from every participating author! That’s TWELVE books, and some of them are offering boxed sets. That’s even MORE Christmas reading for you! Winner will be announced December 15.

Sarah Mayberry made a book trailer for her incredible book His Christmas Gift, which is connected to Three Nights Before Christmas. If you haven’t read it yet, I urge you to. It’s emotional, poignant and sexy — all the things I love about Sarah’s books. Here’s her video.

A book trailer for His Christmas Gift – buy links for major retailers on my website right now http://www.sarahmayberry.com/books-montana-born/4-his-christmas-gift Hope you enjoy!! And don’t forget this book is linked to Kat Latham’s Three Nights Before Christmas, an AMAZING read.

That video inspired me to make one of my own. I hope it puts you in a Christmassy mood!

Have you read Three Nights Before Christmas, His Christmas Gift or any of the other Tule Christmas books yet? If you take the quiz, let us know what your score was!

Thank you all so much for giving me your feedback on the various cover possibilities for Unwrapping Her Perfect Match, my upcoming London Legends Christmas novella! Two of them were tied for first place. They had more votes than all of the others put together. They both had the same background. The only difference was the font used for the title, so I chose the one I thought looked more Christmassy (because that’s what we want for our Christmas stories, right?).

So here it is, the cover for Unwrapping Her Perfect Match!

I love this cover. I hope you do too. Thank you so much for helping me choose it!

And here’s what it’s about.

’Twas a week before Christmas, and at the auction house…

At six foot one, Gwen Chambers has felt like a giant her whole life. She’s a calm, capable nurse saving lives in a busy London hospital, but healthy men give her heart palpitations. When larger-than-life rugby player “Little” John Sheldon convinces her to bid on him in his team’s fundraising auction, she discovers how pleasurable heart palpitations can be.

A rugby player was stirring, with desire no one could douse…

John has wanted Gwen since he first saw her, but when he’s injured in a match just before Christmas he suddenly needs her too. Not only can the sexy nurse help him recover, but she might be able to help him look after his daughter—a shy ten-year-old who speaks only French.

But will it be a Happy Christmas for all, and for all a good night?

From decorating the Christmas tree to ice skating at the Tower of London, Gwen helps father and daughter open up and bond with each other—and she bonds right along with them. But when John’s agent calls with a life-changing offer, Gwen has to decide how far she’s willing to go for her perfect match. Will their first Noël also be their last?

Unwrapping Her Perfect Match will come out on November 11 — the day after Tempting the Player! That’s right, TWO hot rugby players in two days. Christmas has come early!

But that’s not all. On Monday I’ll be back to tell you how you can read it online for FREE. 🙂

Want to read an excerpt? Here it is!

The goddess wore a rugby shirt with the wrong number on it.

John Sheldon watched the woman walk through the door of the stadium’s hospitality suite, where he and his London Legends teammates would soon be auctioned off for charity. Outside, snow blanketed the rugby pitch while green and white Christmas lights strung around the stadium blazed with the team’s colors. Inside, rich people were getting pissed on mulled wine and whisky he’d never be able to afford under normal circumstances. John had been trying not to yawn when the woman entered the room.

Her height drew his notice first. How could it not, when the next-tallest woman in the room came to her shoulders? She was the only woman here who wouldn’t make him feel like a towering giant. Her face was angled away from him, and her wheat-blond locks of hair had been twisted and clamped behind her head in one of those casually elegant styles that begged to be undone, mussed up by big, clumsy fingers. Her neck was slender, her shoulders broad, and her rugby shirt had the number ten on it. His captain’s number.

An elbow jabbed him between the ribs, jostling the tumbler of Islay whisky he held and splashing the amber liquid across his hand. “I count three for me, a dozen for the skipper and nil for you, Shelly. What do you make of that?”

John set his tumbler on a table, tempted to lick the alcohol off his hand so it didn’t go to waste. Opting instead for a classiness he usually failed to achieve, he wiped his wet hand on a cloth serviette and looked down—a good eight inches down—at Matt Ogden, who’d recently become the team’s starting fullback. “Nil what?”

“Bidders.” Oggie raised his brows and nodded at the crowd gathered in the suite.

John scanned the people who’d paid five-hundred quid each to be here tonight. They’d come to raise money for several charities by bidding on a player to do pretty much whatever they wanted for a day. Last year John had been “won” to teach a kid rugby skills. That was a lot better than the year before, when he’d had to show up at a stockbroker’s office and pretend to be his best mate. How he’d got through it without lamping the arsehole was a mystery.

And Oggie was right—not a single person wore his number. At the start of the evening, guests received a replica Legends rugby shirt, and they pinned on it the number of the player they intended to bid for. It was an ice-breaker that gave the players a chance to change people’s minds before bidding started. A good dozen guests, including the goddess, wore the number ten—not surprising, since his captain Liam Callaghan was one of the best-known rugby players in the world. But why in God’s green England would three people want to bid for Oggie when he’d barely played until last month, while John had started every match?

Okay, so Oggie was a little above average height, while John was six-nine. He could see how that might intimidate people. And Oggie was apparently good looking—if you asked him—so that explained why all of his bidders were female.

“Fucking hell,” John muttered, the potential for humiliation sinking in. “I’m not standing up there and having no one bid on me.”

“Looks like that’s exactly what you’re doing. Meanwhile, I’ll have to let those three ladies down gently,” Oggie said, his voice betraying the fact that he might be here physically but mentally he was back home, shagging his best friend Libby.

The specter of a crushing defeat loomed over John, and his determination to come out on top finally kicked in. “I may not get as many bidders as you, mate, but I bet I can raise more money.”

“Really?” Oggie laughed and stretched out his hand. “You’re on. What does the winner get?”

“Pride. Bragging rights.” He held up his tumbler. “And a bottle of this whisky.”

“Done. Now go do what you do best. Knock some heads together.”

John knew right where to start. The goddess might’ve started the evening wearing his captain’s number, but by the end of the night she would be calling out his.

Read more here, or pre-order the book! And if you want to read more about Matt and Libby (in the bath!), you can read an excerpt of Tempting the Player here.

It’s the holiday season, and that means it’s time for the Mistletoe Madness blog hop! Over 50 authors (including me) are giving away goodies on our blogs…PLUS, several authors got together to sponsor a special prize: a Kindle Fire!

You can find out more about the giveaways at the bottom of this post. 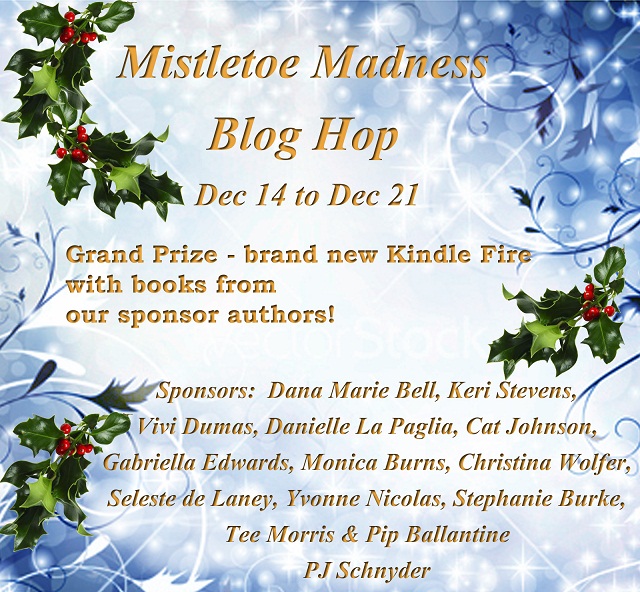 This year I’ve been really lucky to discover some amazing authors who had been languishing in my TBR pile for months. These are authors I’d kept hearing about and even follow online, but I just hadn’t gotten around to reading their books. Once I did, I fell completely in love with their writing.

END_OF_DOCUMENT_TOKEN_TO_BE_REPLACED

I’m going to be participating in the Mistletoe Madness blog hop starting on Friday, December 16!

This is my first blog hop, and I’m thrilled to be taking part with more than 50 book bloggers, each of whom will be hosting a giveaway.

On Friday, I’ll announce what my giveaway is. In the meantime, on PJ Schnyder’s site, you can see who else is participating so you can start checking out their blogs and maybe follow them. Between December 16-23 you’ll be able to fill out a form on PJ’s site to enter the giveaway for a Nook! (US only)

Look forward to seeing you all here on Friday!