This summer when I was home in San Diego, I went on a very special research trip.

I took a flying lesson over La Jolla in an experimental airplane built by the pilot, Jeremiah D. Jackson. The plane — the Urban Coyote — had recently been rebuilt after crashing in the mountains, an accident that Jerry describes in his gripping book Four Minutes.

My lesson was part of my research for my own book, Tempting the Player. It’s about Matt, a professional rugby player who’s terrified of flying, and his best friend Libby, a commercial airline pilot who helps him overcome his fear. In this video, you won’t hear Jerry or me talking (in fact, the sound seems to have disappeared completely, but trust me, it was LOUD in that plane) but you’ll see beautiful views as we leave the Pacific Ocean, fly just north of the Coronado bridge and come in to land at Montgomery Field. Also, I have NO IDEA why the thumbnail is gray. I chose a different thumbnail for the video, but it’s not showing up. Technology, eh?

We flew over the ocean (which I tried to video but my phone froze and the video didn’t save). It was so beautiful, but I was really nervous. I used to love being in planes when I was younger, but when I was in my early 20s I suddenly developed a terrible fear of flying.  These feelings helped me get inside Matt’s head, but I decided to take a flying lesson to find out more about what he would feel when Libby hands control over to him.

Jerry and I my dad have been friends since second grade, so I know he has about as much experience flying as he has walking. He’s also a scuba diver and a skydiver. When I was in high school, he helped make science relevant and fun for me. I remember when I had to do a project for my chemistry class, and Jerry came over with a bottle of soda and explained how air embolisms form in scuba divers. Basically, he’s brilliant, and he showed me how cool scientists can be. He also showed me around his work as an environmental engineer one day and encouraged me to consider engineering as a career. (I studied English instead.) 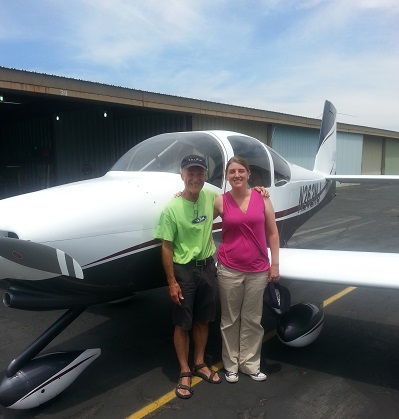 I was waaaay more comfortable when Jerry was in control of the plane, but I still managed to execute a turn over the ocean.  Let me tell you, when you’re staring down at the ocean, a thousand feet suddenly doesn’t seem very high. In fact, it seems like you could close that distance in about a second. And I really felt for poor Matt and all I made him suffer in the book.

Want to know more? You can read about my flight in December’s issue of RT Magazine!

P.S. I wanted to share a really cool article about Tempting the Player on one of my favorite blogs, Romance Novels for Feminists. Jackie Horne wrote about Matt’s fear of flying and traditional masculinity. Hope you’ll read it and maybe leave a comment!

This is the last post in a series I’ve done on visiting the real-life locations your story is set in.

Last week I asked how well you thought you could write about a place you’ve never seen, and I gave nine reasons you should visit your setting if at all possible.

Today I’m giving you some tips I learned while on my own research trip in Bosnia. Some of these are things you can do without visiting a place – they just take a little more effort to search out.

END_OF_DOCUMENT_TOKEN_TO_BE_REPLACED

Earlier this week, I asked how well you can describe a place you’ve never been to. In the comments, most people believed writers can describe real-life locations pretty well as long as their research is good enough.

In general, I think that’s probably right. But it doesn’t all come down to research. It’s also a matter of imagination – especially having the creativity to know which questions you need to ask about a location – and confidence.

A week ago I was in Bosnia doing research for the novel I’m writing. Being able to visit my setting in person was a joy and a treat. I know I’m lucky to be able to travel, and it’s a luxury not everyone has. Nor is it something everyone enjoys.

But whether your story is set in a foreign country or the next town over from where you live, these are some of the reasons it makes sense to visit to visit the place you’re writing about.

END_OF_DOCUMENT_TOKEN_TO_BE_REPLACED

Research – love it or hate it, it’s vital for any well-written story. If, like my critique partner Suzanne Johnson, you write urban fantasy and paranormal romance, you might find your bookshelf filled with fun titles like The Complete Guide to the Undead. I’m jealous; my shelves are filled with war diaries.

As a contemporary romance writer, I get to research by asking real people about what their lives and jobs are like. Since I’m working on a series about women who work for a humanitarian organization, and I work for such an organization myself, I’m surrounded by friendly experts.

But there are times when I think of ideas for historicals and, if I’m honest, the thought of spending months upon months sifting through old newspaper articles and history books feels a little overwhelming. Writing a novel set in a completely different world would be so much easier if we had time machines and could talk to the people who actually lived there.

So, this week my gift to you is one day in a time machine.