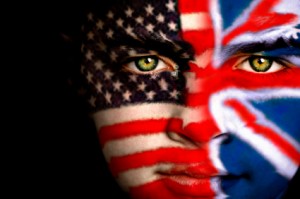 Many of my books are set in London, but many of my readers are American. As an American who’s married to a Brit, I can assure you that we two nationalities sometimes speak a very different language – and it can lead to big misunderstandings!

When my husband and I first started going out, I made the rookie girlfriend mistake of offering to do his laundry for him (I’ve been doing it ever since). He gave me an armful of colored clothes but left his whites in a pile on the living room floor (total 25-year-old bachelor). On top of the pile of whites, there was a pair of khaki pants, so I pointed to that pile and said, “Do you want me to wash your khaki pants, too?”

He turned red and said, “Um, if you really want to.”

Then his face cleared, and his Master’s degree in American Lit kicked in. He remembered what khaki pants are in the U.S., and he explained his embarrassment. “In the UK,” he said, “pants are underwear, and, uh, kak means shit.”

Yes, after our first real date, I basically told my future husband, “I’d like to wash your shitty underwear.”

So, to help avoid any other misunderstandings, here are some of the British words and grammar my characters use, along with an explanation for my American readers.

In the UK, pants are underwear. You wear trousers over your pants.

Only girls have a fanny. If you are a girl, your fanny refers to what some Brits also call your “front bum.” (Side note: If you want to make a Brit giggle, tell him about your fanny pack.)

An aubergine is an eggplant and courgettes are zucchini.

Sarky is British slang for sarcastic.

Something with elastic in it is elasticated, not elasticized.

When talking about dates, Brits will sometimes use ordinal numbers (e.g. first, second, third, etc.) for both the day and the month. For example, the first of the third would be the first day of the third month, or March first.

In British English, collective nouns (i.e. a noun that refers to a group of individuals, such as family and team) are plural because they’re composed of more than one person. That’s why you’ll see phrases like my family are and England are—when referring to the England rugby team, not the country—instead of my family is and England is. I know it looks like a typo if you’re not used to it, but it’s not.

Brits often refer to sport in the singular (I don’t watch much sport) and maths in plural (I’m great at maths).

Lastly, Brits don’t use the word gotten (as in, I have gotten used to explaining British English). They use got instead.