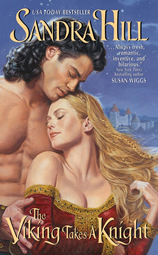 Ignore the mullet-man on the cover. This novel is a funny, sexy romp through tenth-century Britain and the Norselands.

Ingrith, a Viking princess living in Britain, runs an orphanage that rescues children from horrific circumstances. One of those children is Henry, the king’s by-blow, and when Ingrith hears the king is looking for the young boy (presumably to kill him so he doesn’t challenge the throne), she flees with eight of the orphanage’s children.

She ends up on the estate of John of Hawk’s Lair. The two are acquaintances, but when he sees her this time, John begins to notice her feminine curves, her soft hair, her skill in the kitchen…and her sexual curiosity.

John is determined not to marry because his father was violently insane. John is a kind and tender man, and he’s terrified that he would pass down his father’s insanity to an innocent child. Instead, John spends his time beekeeping and experimenting with honey – searching for its healing and contraceptive properties.

Don’t let words like ‘beekeeping’ and ‘experimenting with honey’ fool you, though; The Viking Takes a Knight is not in the least bit boring. On the contrary, Ingrith and John are lively and passionate, and the world they live in comes alive through this well-researched novel.

As Ingrith and John fall for each other, they have to deal with John’s unwillingness to have intercourse because of his fears for his future children, and Ingrith’s hurt that he refuses to marry her under any circumstances.

I had a wonderful time reading The Viking Takes a Knight. Sandra Hill’s voice is playful and ribald—imagine a naughty Julia Quinn. And it perfectly fits the setting. This is tenth-century Britain, a multi-cultural place where Saxons live alongside Norsemen, and people from across the known world come to trade. While women’s chastity is important, women aren’t held under society’s lock and key, so sexual banter and songs are commonplace. While John’s thoughts about Ingrith are delightfully impure, he gets really embarrassed when others make sexual remarks around her.

For example, when they’re having dinner with a large group of people (including a dirty-minded Norseman named Hamr), Ingrith tells John about the men her father has tried to marry her off to.

“Olaf Wart-Nose. Vikar the Vicious. Hakon the Horse, who was rumored to have two phalluses, though I cannot countenance the truth of that boast and do not want to think how that would benefit any woman in the bedsport.”

“I could think of several benefits,” Hamr said from Ingrith’s other side. “Wouldst like me to explain?”

“Nay!” he and Ingrith exclaimed at the same time.

He could not believe that a noblewoman would bring up such a subject in mixed company. In truth, her coarse tongue both fascinated and repelled him.

I always enjoy reading historical romances that aren’t set in Regency England, and The Viking Takes a Knight is packed full of interesting tidbits about life in the tenth century. So much of the vocabulary is authentic that there’s actually a glossary at the end – not that you really need it, as the words are always clear by their context.

But Sandra Hill is writing for a contemporary audience, and often makes tongue-in-cheek references using modern language. At the beginning of each section, she writes a quip that reveals a clue about what will happen—like, “Sometimes the best meals involve no food…”—and these little expressions make the novel even more fun to read.

The reason this novel is an 8 instead of a 9 is that the narrative isn’t polished to the same standard as the characters and dialogue. There were a few times when I was thrown out of the story and had to re-read to follow the action and picture the scene. But overall, I enjoyed The Viking Takes a Knight and will gladly pick up another Sandra Hill novel.

(Review first posted on The Season)