In Colorado Dawn, Kaki Warner’s trademark humor, grit and attention to detail come together in a beautifully vibrant, entertaining, and emotionally gripping story. 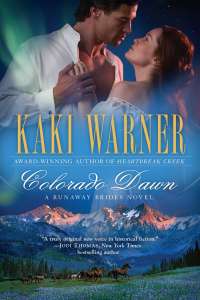 Maddie and Angus Wallace have spent only a few nights together in their six-year marriage. The last time Angus deserted her to rejoin his regiment, Maddie struggled unsuccessfully to make a life with his family in Scotland. She finally leaves and strikes out for Colorado Territory, where she becomes a celebrated photographer introducing the world to America’s west through a female eye.

She tells her new friends in the failing mining town of Heartbreak Creek that she’s a widow, a lie that catches up to her when Angus (now Viscount Ashby, or Ash) seeks her out because he needs an heir.

But how can she even think about forgiving him, much less giving up a meaningful career, for a lazy life among the backbiting aristocracy? And how can Ash give up centuries of duty for a life thousands of miles from his family and heritage?

I’ve read all of Kaki Warner’s novels, and they go from strength to strength. Colorado Dawn is the second in her Runaway Brides series (Heartbreak Creek is first), and this novel cements Kaki’s place as one of my favorite novelists.

For me, one of the great pleasures of reading a Kaki Warner novel is the voice she gives her heroes. They’re rough, rugged and funny, but they’d do absolutely anything for their heroines. Unlike their Victorian England counterparts, there’s nothing polished about them. They’re survivalists, and it’s a good thing because hoo-boy! Kaki throws a hell of a lot of conflict their way.

Though Ash is a new member of the British aristocracy, he has much more in common with the sheriff and ranchers of Kaki’s previous novels than he does with English toffs. Ash is a Highland warrior, a soldier, who has suffered grave injuries and losses. Although he devoted most of his life to his career, and was devastated to lose it, he has managed to keep his sense of humor, as shows in this scene when he’s driving Maddie back to town after a night of passion.

They spoke little. It was one of those highly charged female-type silences that eroded a man’s confidence and had him scanning through recent events to determine what he might have done wrong. Ash tolerated it as long as he could, then looked over at his wife. “It was the uniform, right?”

In the slanted light, her eyes were as brown and clear as the medicine bottles that had lined the windowsill beside his hospital bed. Filled with promises and hope. Addictive.

“That caught your eye.” When she still showed no understanding, he explained. “I can feel you drifting away, lass, and I’m seeking a way to draw you back. The ladies always seemed taken with the uniform. As once did you. Shall I send for it?”

“Drifting away? You can say that after what we—you and I—when we—after last night?” She clasped her gloved hands in her lap and looked away, her cheeks as red as strawberry ice in a paper cone.

“So it went well for you then, love? You dinna say, so I wasna sure. But with all the squealing and carrying on, I should have known.”

Her head whipped toward him. “I did not squeal or carry on.”

And the scene just gets better from there.

I love that Ash is a man of his time, completely befuddled at first by the fact that his wife doesn’t want to give up her photography for a lifetime of leisure and balls. But I also love that he learns how important her career is and strives to find ways to support her in it.

If you haven’t read Heartbreak Creek, I recommend you start there to get a feel for the friendships and the secondary romance that run through the series. I highly recommend this series, and for the next couple of days you have a chance to win Colorado Dawn by leaving a comment on Kaki’s guest post, One woman’s tips on writing the male point of view.

Have you read any of Kaki Warner’s novels? What did you think?