This debut Regency novelist gives readers a truly entertaining romp to start what promises to be a fantastic series. 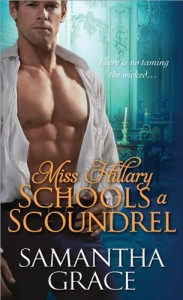 In the midst of her third disappointing Season, Miss Lana Hillary finds herself in a potentially compromising situation: dangling from a tree limb outside a crowded ballroom with her skirts caught up in the branches.

She really will go to extreme lengths to avoid the fortune-hunters trying to trap her into marriage.

Lana wants a husband. She wants a family. But she wants to marry a decent man who respects her, unlike the despicable man she was engaged to in her first Season.

Also unlike Lord Andrew, the rogue who comes to her rescue as she dangles from the tree. At least, she tries to convince herself she doesn’t want him. He’s clearly not decent husband material, but try telling that to Lana’s traitorous body.

I thoroughly enjoyed Miss Hillary Schools a Scoundrel. As the title implies, it’s a novel filled with fun, feisty characters who are as adept at teasing each other as they are waltzing.

For me, the real joy of this book is in the lighthearted banter between the characters, making them feel human and thoroughly entertaining to spend time with.

Take this scene, for example, where you get a brief taste not only of Lana and Andrew’s relationship but of Andrew’s teasing relationship with his teenage sister Gabrielle, whom he’s pretending to chaperon so he can have an excuse to spend time with Lana.

[Lana] made a face, trying to hide her pleasure over engaging in such inappropriate banter with such a handsome scoundrel. In spite of her resolve to marry a respectable gentleman, a roguish one still possessed the power to turn her head, especially one as charming as Lord Andrew was.

“I’m sure you are accustomed to leaving women breathless,” she replied as smoothly as possible. Lana might be an innocent in the strictest sense, but two years in society didn’t leave her naive. Nevertheless, flirting in such a manner was a bold action for her, and thrilling.

Lord Andrew led her to a spot under a shade tree and held her plate while she lowered to the grass. As his sister approached, he called out, “You have no grapes on your plate, Gabby. You must go back for some. Oh, and try some of the melon.”

Lady Gabrielle scowled but slowly turned and plodded back toward the buffet table.

“Miss Hillary, were you trying to seduce me in the queue?”

He chuckled and handed her the plate. “I see.”

They sat in silence while Lord Andrew satisfied a healthy appetite and Lana picked at her food.

Oh, for heaven’s sake. Must her curiosity always be satisfied? “Why do you ask, my lord? Was I succeeding at seducing you?”

He cocked one eyebrow. “You’re an amateur, but close to irresistible.”

This summer, Lana’s brother Jake will get his turn to be a hero in Lady Amelia’s Mess and a Half. After reading Miss Hillary, I really look forward to reading more of this very promising series.

Have you read Miss Hillary Schools a Scoundrel? What did you think?

(Comment by March 13 to be entered in my $25 gift certificate giveaway.)