Quite possibly the perfect romance novel. 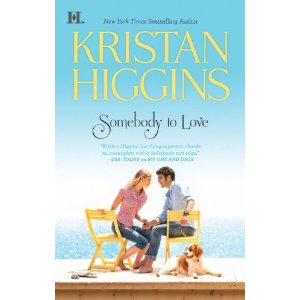 Parker Welles grew up filthy rich. Her father might not pay much attention to her and her five-year-old son, but money has never been an object.

Until the day he loses it all and goes to prison.

Parker’s only hope of an income is the house an estranged great-aunt left her in a Maine fishing village. But when she arrives to fix it up, she discovers it’s in much worse shape than she ever could’ve imagined. And the only person she can rely on for help is her father’s attorney, James, a man she’s never been able to stand.

I love Kristan Higgins’ books – I love her humor, the gut-wrenching emotion, and the communities she creates. But sometimes I find her heroines a little too goody-goody, or her heroes a tad too moody.

I can say that Somebody to Love is by far my favorite Kristan Higgins novel. It’s absolutely perfect.

James is a wonderful hero. He’s devoted to Parker without being whipped, and his love and longing for her are painfully sweet to see. And Parker has the tough edge I like in a heroine without being bitchy.

Kristan Higgins’ books are the brain candy I crave when I’m feeling fragile; her mix of humor and emotion never fails to buoy my spirits.

Take this scene, for example, after Parker is arrested and has to call James for help. The man in the next cell over is crazy and keeps singing “Charge of the Light Brigade”. By the time James arrives to post bail, she’s going crazy too.

She was lying on the steel bunk, an old magazine with a picture of Cameron Diaz covering her face. “‘Into the valley of Death rode the six hundred,'” she said, definitely a panicky edge to her voice.

Parker jerked upright, hitting her head on the top bunk. “James!” She hurtled across the cell, and before he knew it, she was in his arms, hugging him hard, and though she smelled a little dank from her time in the basement, it was sure better than that other smell, and man, he hadn’t felt anything this good in years, her hair silky against his cheek, her body pressed against his.

“Parker. Always lovely to see you,” he murmured, hugging her back.

“James, oh, James, thank God you’re here,” she blurted into his shoulder. “That man over there, he pooped on the floor, and holy halos, there was so much of it! He hasn’t stopped chanting that horrible poem for hours, and if I don’t stop reciting ‘Charge of the Light Brigade,’ I’m going to kill myself.”

“I’m afraid you have to stay overnight,” James said.

She pulled back, eyes wide with horror.

I absolutely loved every minute of this novel, and when I read the end I bawled. Quite awkward, considering I was on the train about to arrive at work.

Have you read any of Kristan Higgins’ books? What did you think? Do you have a favorite?

5 thoughts on “Review: Somebody to Love by Kristan Higgins”