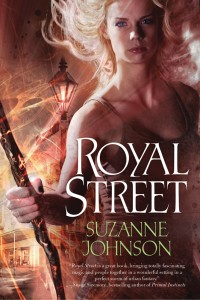 In the interest of full disclosure, you should know that Suzanne Johnson is one of my critique partners. I’ve read early drafts of the second book in this series – River Road – but I’d never read any of Royal Street until I bought it this month. I am completely in love with Suzanne’s writing – I wouldn’t have exchanged chapters with her every week for the last two years if I wasn’t.

Even knowing that I love her writing and I love these characters, I was blown away by Royal Street.

[The very poorly named] Hurricane Katrina has torn down the barriers between modern New Orleans and the Beyond, which is populated by communities of vampires, faes, weres, and the historical undead (including infamous pirate Jean Lafitte).

D.J. Jaco is a wizard whose mentor goes missing after the hurricane. The Elders – who govern all of these creatures and try to keep humans from knowing about them – assign D.J. a partner to help search for him. Alex Warin is a hot, weapon-wielding enforcer who quickly realizes that D.J.’s magical skills and impetuousness need close watching if she isn’t going to get them both killed.

I’m not an urban fantasy reader, but D.J.’s voice (the story is told in first person) is amazing. She’s at once funny and poignant as she deals with the horrific aftermath of her beloved city’s destruction – something Suzanne experienced first hand.

Royal Street is a novel that sticks with you even after you put it down. I struggled to stop reading last night and woke up early to finish it this morning. I drank it down, and as soon as I finished I immediately reread certain parts (the smoochin’).

Suzanne wrote a post on my blog about keeping a romance going throughout a series, and she does a great job of keeping this particular romance reader totally engaged in the simmering passion between D.J. and…:)

I absolutely loved this novel.

View all my reviews on Goodreads

Have you read Royal Street? Do you like series where the romance unfolds over several books?