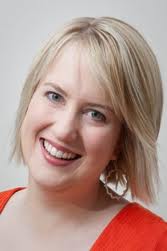 Louisa Edwards is one of my all-time favorite  contemporary romance novelists. Her debut, Can’t Stand the Heat, was released just two years ago, but her sexy chefs and sassy heroines immediately catapulted her to the top of my auto-buy list.

Louisa joins me today as part of my Hearts and Minds giveaway – where you can win books that appeal to your heart and mind. She’s giving away a signed copy of her latest release, Too Hot to Touch, which has the most YOWZA! cover I’ve seen in a long time! She’s also giving away a set of romance trading cards featuring the Rising Star Chef characters.

Giveaway details are below the interview!

1. Welcome, Louisa! First off, what draws you to contemporary romance?

I love the immediacy and relatability of working in the real world, and I’ve found that my voice as a writer works best with modern language and dialogue. And I enjoy worldbuilding when I can use the building blocks of a world that already exists, like the world of professional restaurant kitchens—if I had to figure out my own rules of magic and the paranormal, it would be a disaster! 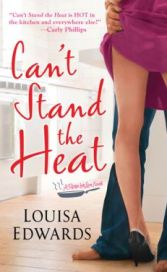 2. If you had to come up with a recipe for a successful contemporary romance, what would it be (and yes, I’m totally asking for selfish reasons, since I write contemporaries)?

I think a great contemporary needs all the same elements that make any romance novel memorable: flawed, interesting characters with tons of sexual tension; a rich, believable world with its own set of rules and behaviors; and a hook that grabs the reader from the beginning.

Sure, in a straight contemporary you don’t have the built-in page-turning aspect of a romantic suspense or paranormal, where the fate of the world is often at stake. But the key to contemporary romance is to show how the development of the relationship and the emotional conflicts ARE life or death to your hero and heroine.

3. You worked in publishing before writing your own novels. What’s one thing you think writers should know about working on the other side of the contract? 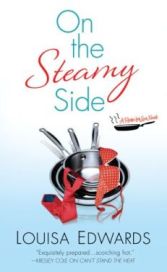 One of the main things we talked about in the editorial department that has helped me as an author is how dangerous it can be when authors get together and start comparing their careers.

It’s an easy trap to fall into, because as writers, we lead fairly solitary professional lives. It’s easy to look at the writing friends closest to you and believe your career will/should proceed as theirs do. But every career is different, every author has her own trajectory, and focusing on comparisons and dissatisfactions will only distract you from the elements of your career that are under your control—i.e., the quality of your writing.

4. I’ll be honest with you—I usually hate secondary romances and skip over them unless I’m reviewing a book. But the secondary romance you have between Frankie and Jess, which runs throughout the Recipe for Love series, doesn’t feel secondary at all; it’s just as compelling as the primary storylines in those novels. What do you think are the most important aspects of a good secondary romance? And is there a couple whose story runs throughout your new Rising Star Chef series? 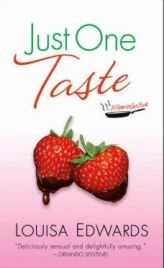 I’m the exact opposite! I love a secondary romance, and often find them more interesting than the main romance. I think it’s because it’s easier to push the boundaries of mainstream romance when it comes to the secondary characters—at least, it is for me. I enjoy playing with unusual pairings, exploring the dynamics that come with characters who don’t fit the typical romance profile of handsome young man falling for a beautiful young woman.

My new trilogy has another slightly alternative secondary romance—a distinguished French magazine editor, Claire Durand, who falls for a much younger man, fellow judge of the Rising Star Chef competition and famous musician, Kane Slater. Their story begins in Too Hot to Touch, and will continue through all three books of the Rising Star Chef series.

5. What’s the hottest thing a chef could cook up for you? In the kitchen, I mean.

Hmmm…well, at my house, I’m usually the chef! But there are a few things my husband is in charge of, and my favorite is probably omelets. He actually watched Julia Child to learn the technique for a perfect French-style omelet. He practiced—a lot. And now he’s a master! Most recently, he did an amazing filling with shallots, sautéed mushrooms and bacon. Yum!

Last, can you tell us about your latest release? I can’t wait to read it! 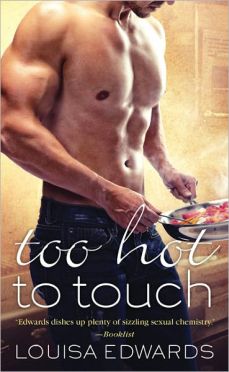 Too Hot to Touch is the first book in my new Rising Star Chef trilogy, all about a team of talented cooks entering the biggest, toughest culinary competition in the country.

In THtT, we see the team forming. Max Lunden is called home from a decade of wandering abroad and learning exotic culinary techniques to help his family’s restaurant field a team for the RSC. It’s hard for him to be back in New York, dealing with a family he loves, but has a lot of friction with.

Luckily, he’s discovered the perfect distraction—Jules Cavanaugh, the woman his family took in as a teenager, and who now helps Max’s dad run Lunden’s Tavern. Jules is tough, yet surprisingly vulnerable, and even though she had a crush on Max back when they were kids, she’s determined to keep her cool around him now. No matter how hot it gets…

THtT also introduces readers to the hero of the second book in the trilogy: Danny Lunden, Max’s  younger brother, who also happens to be the team’s pastry chef. His story, Some Like it Hot, will be out on November 29th! And it will be followed by Hot Under Pressure in April 2012, where we’ll finally find out more about the mysterious Beck, the newest member of the Lunden’s team…

Thanks to Louisa, one lucky commenter will win a signed copy of Too Hot to Touch, as well as a set of romance trading cards featuring the Rising Star Chef characters.

And, since this blog party is in celebration of my husband passing his PhD, I’m also giving the winner one of the books my husband studied – What We Talk About When We Talk About Love by Raymond Carver.

Just leave a comment below to be entered. I’ll choose the winners on Monday, August 29, when my next guest – Rose Lerner – will be joining me!