Thanks to everyone who stopped by Beverley Kendall’s post on what makes an alpha male – and the difference between alphas and alphaholes.

Bev is giving away three copies of her new adult romance When In Paris…and the lucky winners are Jen B (whose definition I love: “He should be big and bad and a snuggle bunny behind closed doors.”), Jen M, and Joss1.

A good day for people with short names starting with J!

Congratulations! Email me at romancingkatrina[at]gmail[dot]com and let me know what digital format you’d like your book in.

Didn’t win? Here’s more about the book and where you can buy it. 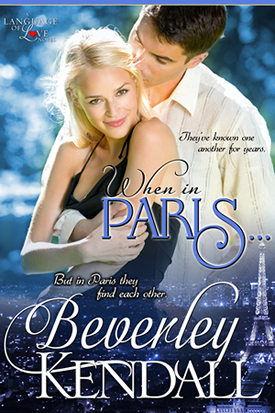 College freshman Olivia Montgomery is thrilled at the chance to start over, escape the rumors that plagued her in high school. And she can finally put her juvenile crush, Zachary Pearson, where he belongs—in her past. Then her unrequited love strolls into her French class, shattering Olivia’s newfound peace, and the feelings she’d thought buried for good come rushing back. Now she can’t shake her unwanted attraction to the one guy who can twist her stomach into knots with just a smile…but has never given her the time of day.

Zach’s good looks may have always gotten him his pick of girls, but it’s the star quarterback’s skill on the football field that gives him his pick of the Big Ten colleges. To escape the crushing demands of his win-at-all-costs father, Zach opts for a private university in upstate New York where…his present and past collide. And the one girl he’s always wanted but can’t have—and a class trip to Paris—turn out to be the ultimate game changer that has him breaking every one of his rules.

2 thoughts on “Winners of the Beverley Kendall giveaway!”