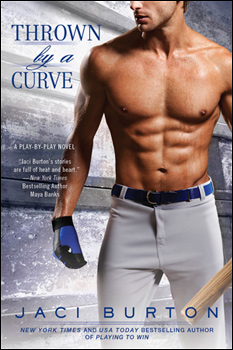 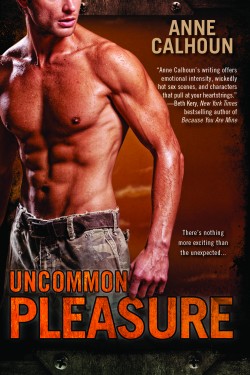 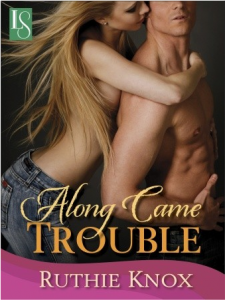 My two cents
I actually got to read an early copy of this, thanks to Ruthie herself – and it’s fantastic! I love Ruthie’s voice. Her characters are funny and vulnerable, even though they’re determined to kick ass – which, of course, they do in the end once they realize that teamwork is much better than going it alone.

Ruthie will be here answering my questions and giving away a copy of Along Came Trouble on March 18th. I can’t wait!

Too Hot to Handle by Victoria Dahl 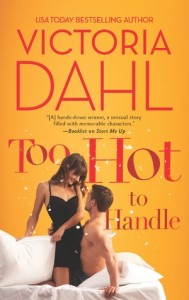 Merry Kade has always been the good girl. The best friend. The one who patiently waits for the guy to notice her. Well, no more. Merry has just scored her dream job, and it’s time for her life to change. As the new curator of a museum in Wyoming, she’ll supervise some-okay, a lot of-restoration work. Luckily she’s found the perfect contractor for the job, and even better, he lives right next door.

Shane Harcourt can’t believe that someone wants to turn a beat-up ghost town into a museum attraction. After all, the last thing he needs is the site of his dream ranch turning into a tourist trap. He’ll work on the project, if only to hasten its failure…until the beautiful, quirky woman in charge starts to change his mind.

For the first time ever, Merry has a gorgeous stud hot on her heels. But can she trust this strong, silent man, even if he is a force of nature in bed? When Shane’s ulterior motives come out, he’ll need to prove to Merry that a love like theirs may be too hot to handle, but it’s impossible to resist.

My two cents
RT Magazine named this one of their most anticipated contemporary romances of 2013, and it’s definitely at the top of my list, too! I love everything Victoria Dahl writes, and I can’t wait for this one to come out.

I’ll randomly choose one winner on Tuesday March 12th. That person will get a $10 gift certificate to the online book retailer of their choice, AND I’ll send the same to the author they mention.

If the winner mentions more than one author, I’ll ask her to choose which one gets the gift certificate.

This is open internationally.

Questions:
What contemporary romance novel(s) being released in March are you looking forward to? Have you read anything by the authors I mentioned? Which of their books do you like best?

42 thoughts on “Contemporaries to covet in March – & giveaway!”