When Smarty Pants and I were living in Prague, we got caught in sudden summer thunderstorm during a picnic. We had only a few seconds’ warning before the clouds rolled in and torrential, frigid rain pounded down on us.

We threw our food back in the basket and ran for the closest cover: a copse of trees. Soaked through, we hugged each other and shivered, waiting until the rain passed. I felt Smarty Pants trying to tug the back of my pants down, something I thought was odd since we were outside, it was broad daylight, and he’s a pretty reserved Brit when it comes to public displays of affection.

Then I realized I also felt Smarty Pants’ hands on my upper back. Two hands.

He wasn’t the one pulling my pants down.

I jerked out of his arms in time to see a tiny animal, like a rat, drop from where it had clung to my wasitband. “Frickin’ hell! A rat! A giant, nasty rat!” 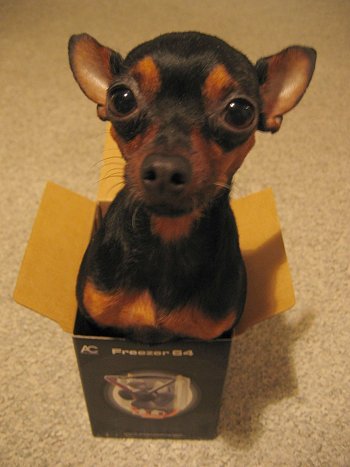 But as I looked closer at the little thing shivering in the mud, I saw it wasn’t a rat. It was a very young puppy. A Prazsky kyrsarik (Prague ratter, or Prague ratcatcher).

It’d had clearly been terrified by the thunder and run away from its owners. We’d been standing next to a low wall that was holding an embankment, so this baby must have run down the hill and launched itself at me.

I picked her up and fell in love.

I cradled her shaky body against my chest until the storm passed, and then we walked around the park looking for her owner. No one seemed to recognize her.

We took her home, got food from friends, and tried to figure out what to do. I wanted to keep her, and she clearly wanted to keep me. She refused to be separated from me. I named her Little Buddha since she had a cute tummy. Smarty Pants called her Yoda.

And then he sneezed.

And I remembered we’d just signed a lease on an apartment that had an absolutely-no-pets clause.

Some of my Czech students told me about the local humane society, so Smarty Pants and I decided to take her there. We took a bus through a forest, then walked a couple of miles from the last stop with my little baby prancing at our feet, totally clueless that we were about to drop her off in the hopes that her real owners would find her.

She cried when I left, and my heart broke. I actually felt it shatter into tiny pieces as Smarty Pants put his arms around me and led me away from the building and back through the woods. After about a mile, I was inconsolable. I’d worked myself into such a sobbing, messy state that snot bubbled out of my nose and my face was covered in tears and God knows what else.

Nothing Smarty Pants said helped. Half way through our walk, I wiped my nose with the back of my hand and smeared myself with snot. Smarty Pants (who, fortunately, isn’t easily grossed out or he would’ve dumped me long ago), stopped me in the middle of the road and lifted the hem of his t-shirt.

“O-o-ok-ay,” I sniffled before leaning over, grasping the belly of his shirt, and blowing my nose with a tremendous honk. As I wiped the rest of the snot off my cheeks, I noticed he’d gone completely still. I looked up into his carefully blank face.

“I meant…to wipe your eyes.”

I laughed so hard I nearly pissed myself.

That was over eight years ago. This week, he and I sat at a hospital in LA with my grandparents for nearly three days as my grandpa fought a serious blood infection and was prepared for surgery. Grandma refused to leave his side except for a few hours at night to sleep. We were there to make sure Grandma took breaks to eat, walk around, and had people she could lean on. We fielded calls and kept the family and their friends up to date through every gut-wrenching turn in Grandpa’s health.

I was doing fine, keeping busy, until the doctor met with me and Grandma at Grandpa’s bedside and told us more about his condition. She gestured to me and said, “If you had this blood infection, it would be serious.”

She left unspoken: Holy crap, he’s 90 years old. This is going to be freakin’ tough for him to fight.

I walked back to the waiting room to give my grandparents time alone. And I broke down in Smarty Pants’ arms. I buried my face in his chest and sobbed. He held me for several quiet minutes before whispering, “I’m wearing a t-shirt under this jumper.”

Forget a six-pack; the sexiest trait a man can have is the ability to make you laugh when you feel like your world’s caving in.

What do you think is the sexiest trait a man can have?

21 thoughts on “The sexiest trait a man can have”