I couldn’t draw out the pleasure that long. I had to devour all three of her latest Lucky Harbor novels in one week.

So instead of posting a review a week over the next three weeks, I thought I’d give all three reviews to you at once. Because I obviously have self-control issues when it comes to Jill Shalvis’s books. 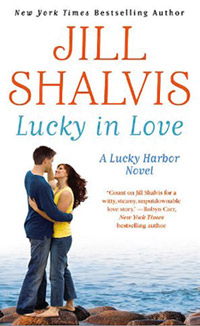 E.R. nurse Mallory Quinn has a terminal case of goodgirl-itis. She grew up in Lucky Harbor, in a family so chaotic that she thought she had to be perfect in order to keep everyone together. But that means she’s always played it safe, and now has a reputation for being selfless that she can’t shake.

Bad boy Ty Garrison is recovering from an injury that derailed his career, and from the loss of his closest friends when he was a Navy SEAL medic. He couldn’t save them, and now he thinks of himself as someone who can’t be relied on in a crisis. But he’s drawn to Mallory Quinn like a moth to a flame, and as much as he tries to protect her from falling in love with him, he can’t keep his own heart from taking a tumble.

I’ve been looking forward to Lucky in Love since I read an excerpt nearly a year ago, and the novel was everything I’d hoped it would be and then some. Of the three heroines, Mallory is the one I could relate to the most. She’s spent her life putting other people’s wishes first and trying not to let people down. When she finally realizes that she’s letting herself down, she tries to have a casual relationship with Ty – but soon figures out she can’t divorce her heart from her body.

Jill Shalvis is a master at creating characters with instant, undeniable attraction. Ty and Mallory completely burn up the pages as they fall in love.

Lucky in Love introduces the reader to all six of the characters who couple-up over these three novels. The three heroines – Mallory, Amy and Grace – bond during a moment of crisis and continue to support each other through life’s heartaches and joys. Their friendship throughout the series is just as addictive as their love stories and the chocolate they devour whenever they meet.

When I finished Lucky in Love, I had to start reading At Last within 24 hours because I needed to get back to Lucky Harbor. It’s the most special community I’ve come across in a contemporary romance series.

Read an excerpt of Lucky in Love 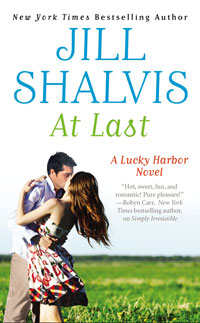 Amy Michaels has the kind of past that belongs in an after-school special. She was a teenage runaway and did things she regrets in order to survive on the streets. She hasn’t been in Lucky Harbor long, but she’s managed to make two good friends (Mallory from Lucky in Love and Grace from Forever and a Day), she has a stable job in the local diner, and she’s exploring the local mountains with the diary her grandma wrote about her own travels several decades ago.

Which leads to a run-in with sexy forest ranger Matt Bowers. Amy tries hard to ignore the feelings Matt stirs in her. Sex has always been a dangerous activity for her, and she’s trying to turn over a new leaf. But Matt tempts her beyond reason…and he can’t deny how much he wants her, either.

Of the three novels, At Last was my favorite. Perhaps that’s because Amy’s life experiences are so completely opposite of mine. Or maybe because the national parks are my absolute favorite thing about America, and I’ve always found forest rangers sexy (except for the khaki shorts).

But really, I think it’s because Jill Shalvis has created two characters whose chemistry smolders – even more so than her usual couples, if you can believe it – making the final happy-ever-after all the more poignant and redemptive when it comes.

Read an excerpt of At Last

Forever and a Day 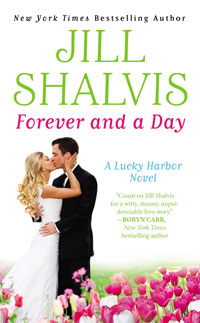 Grace Brooks is Lucky Harbor’s newest resident. Her high-powered banking career has tanked, and she’s struggling to figure out what she’s going to do about it. Banking has never been her passion, but the problem is that she doesn’t know what her passion really is. All she knows is her bank account is dwindling, fast.

So when E.R. doctor Josh Scott calls and offers to pay her if she’ll walk his sister’s dog, she jumps at the chance. The single father of a five-year-old boy and carer for a paraplegic sister, Josh’s personal life is challenging enough. His career is so full-on that he barely has time to breathe. The last thing he has time for is love. But love isn’t something that either Grace or Josh can deny when it smacks them upside the head.

Forever and a Day is probably the funniest of the three latest Lucky Harbor novels. I kept highlighting passages that made me laugh out loud, like this one between the three heroes of the series.

The morning went so smoothly that Josh got an actual lunch break. He met Ty and Matt at the Love Shack, Lucky Harbor’s bar and grill. They’d beaten him there and were seated at a table hunched over Cosmo magazine.

“It was on the table when I got here,” Matt said in his defense.

Josh eyed the open magazine. “You don’t already know how to satisfy your boyfriends in bed?”

“Look at you with the math skills,” Josh said.

Matt flipped him off while Ty flipped the page. “‘How to Give Your Hoo-Ha a Spa Day.’ Huh,” he said. “I didn’t know a woman’s hoo-ha needed a spa day.”

Just because the novel’s funny doesn’t mean it’s any less gut-wrenchingly emotional than the other two. In fact, Josh and Grace have more to battle against, in some ways, because of Josh’s family and overwhelming career, and Grace’s fear of having to live up to someone else’s expectations. They fight hard to figure out what they want from their lives, and they discover they want each other.

Buy Forever and a Day on Amazon | Barnes & Noble

Read an excerpt of Forever and a Day

All three of the latest Lucky Harbor novels made me tear up at points, and all three made me laugh. And that’s the beauty of Jill Shalvis’s novels. They are the complete package of romantic loveliness.

Jill Shalvis, please give us another Lucky Harbor novel soon!

Have you read any of Jill Shalvis’s Lucky Harbor novels? What did you think? Do you have a favorite?

12 thoughts on “Triple review: Lucky in Love / At Last / Forever and a Day by Jill Shalvis”