Today I’m really excited to have Dani Collins here to talk about the third book of the Bachelor Auction series, The Bachelor’s Baby. Welcome, Dani, and congrats on your latest release!

Hi Kat. Thanks for having me here today. I’m excited to meet all your readers. *Waving*

1. Tell us a little about the hero and heroine in The Bachelor’s Baby.

Meg is the sister of my hero, Blake, from Blame The Mistletoe. They’re both adopted, but have different back stories. While he knew his grandparents and had ties to the community of Marietta, her biological parents are a mystery. That’s always left her with questions and a deep sense of rejection. This need to know why takes her into investigative journalism and even a spot on the evening news in Chicago, using her birth name, but she’s never found her birth parents.

Linc lost his dad when he was too young to help his mother keep the ranch they loved. She sold it and worked hard as a single mom to provide for him. Once he was old enough to work the oil rigs, he did it for the money, to support her, but he’s always wanted to go back to ranching and finally buys a foreclosed ranch near Marietta, Meg’s hometown.

2. How does Meg end up buying Linc?

Well. Meg is home to clean out her old bedroom because Blake is marrying and needs her room for his new step-daughter. It makes Meg realize that she’s saying goodbye to her hometown and she’s quite melancholy and winds up ditching her truck in a snow bank, she’s so distracted. Linc stops to help her and, being a bachelor with certain desires, kind of propositions her.

She declines, but it starts a bit of a thing between them. When Lily, Sarah Mayberry’s heroine from Bound to the Bachelor, approaches Meg to ask if Blake would like to be a bachelor, she suggests Linc would make a perfect addition to the line up. He gets mad and she feels bad and winds up bidding on him. That doesn’t go well either.

First off, Meg is heading back to Chicago. They only have the one night and it’s kind of a surprise to both of them that it happens (but, as Linc reminisces later, they ‘nearly set the bed on fire.) Then, as you can guess by the title, Meg winds up pregnant. Linc never wanted a family—he made that clear to Meg that night. For Meg, having an unexpected pregnancy is her worst nightmare. She was going to be better than her birth mother, but here she is and Linc’s initial resistance is super hard on her, but he mans up very quickly and they start to work out how to proceed.

4. Is The Bachelor’s Baby related to any of your other books?

You betcha! My first Montana Born book was Hometown Hero, or, as one reviewer called it, The Ballplayer & The Secretary. Chase Goodwin comes back to town to help his half-brother and falls for an old crush, Skye Wolcott.

Blame The Mistletoe opens at a Christmas party hosted by Skye and Chase and features Liz, a California girl housesitting for the holidays and Blake Canon, who I mentioned above is Meg’s brother. They have an awkward connection in that their exes are brother and sister and things get pretty complicated when their children and ex-inlaws find out what they’re up to.

Finally, I’ll have a fourth book in this series out in May of this year called His Blushing Bride. I’m super excited about it because I adore the hero, Bastian. He’s Liz’s brother and is a total hottie who gets his heart handed to him by Piper, the high school music teacher.

Ooh, great question! George Clooney is obviously a contender, but I have a terrible crush on John Hamm (especially as Don Draper. *swoon*) Robert Downey Jr. is adorable, as is Benedict Cumberbatch, but if we go much younger than that (Chris Pine) it starts to get weird.

As for what kind of date… Hmm. I’ve been married for nearly 25 years. We went to dinner and a movie last weekend and it was Subway and The Duff. Going to a real restaurant with cloth napkins would pretty much knock my socks off.

Writing romance (seriously, I started dreaming of doing this when I was in high school.)

Round the world travel, possibly on a cruise but I wouldn’t want to be stuck on a ship. I just like the idea of unpacking once.

I have a million of them! Iceland, Spain, Ireland, St. Petersburg, cruise The Black Sea, every natural wonder, Caribbean beaches, the Great Wall of China…  and on and on….

If you could live anywhere in the world, where would it be?

Just the other day I thought my husband might actually go for living in Ireland and I could definitely get into trying that for a year, but I’d love any sort of wine country – which is ridiculous because I’m two hours from wine country here. I just need to either make the drive more often or plant some grapes.

One signed copy of Montana Homecoming. It includes my novella, Hometown Hero and four other Montana Born novellas, plus bookmarks, a pad of sticky notes and a pen.

About THE BACHELOR’S BABY

Your date with Bachelor #3 includes champagne and chocolate in the limo that collects you, a helicopter tour or Marietta and the surrounding mountains and valleys, and dinner at a five star restaurant in Great Falls. While oil baron Linc Brady wines and dines you, a maid service will completely clean your home. 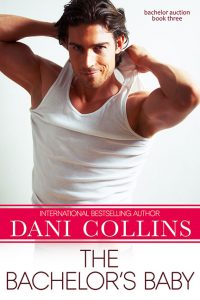 Who could resist this tempting offer? Meg Canon plans to do just that. She’s only home to clean out her childhood bedroom for her brother’s new step-daughter, then she’s outta her childhood small town and back to her life in Chicago. Then she meets the sexy, renegade millionaire while she’s stuck in the snow. Sparks fly and Meg is tempted to stay a little longer.

Linc Brady is new in town and happy to help a kid in need, but a bachelor auction? Technically he doesn’t owe Meg a damned thing after she sets him up for the auction, then bids on him, but her high-class city polish is his fatal weakness and makes her impossible to forget. When she agrees to come home with him, he makes it clear he’s a confirmed bachelor. This is a one-night thing.

One night that turns into nine months and maybe…a lifetime?

Award winning author Dani Collins wrote for 25 years before selling to Harlequin Mills & Boon in London in May of 2012. Since then, she’s turned in more than a dozen titles to Harlequin Presents and HarlequinE plus four small town contemporary novellas to Montana Born. She has even found homes for some of her previously rejected manuscripts, including indie-publishing her single title romantic comedy, Hustled To The Altar and signing with a small press for her medieval fantasy, The Healer.

Stay current with Dani’s new releases by joining her newsletter or visiting her here: