Most devoted romance readers will know of a fantastic site called The Season for Romance, which is packed with information and reviews about upcoming romance and cozy mystery releases.

Beverley Kendall, the powerhouse behind The Season, is a bit of a Renaissance woman. Not only has she built that incredible site, but she’s also a very successful historical romance novelist.

I absolutely adore Bev – not only has she given me the opportunity to write reviews for The Season, but she also lets me write a weekly post about contemporary romance for her blog.

She’s here today as part of my Hearts and Minds giveaway – where you can win books that appeal to your heart and mind. Giveaway details are below, but first I’m happy to welcome Bev to my blog!

1. I love that you write about (in your words) “a period when ladies strived to be genteel and dresses could barely fit through doors.” But you also make history, erm, a hell of a lot sexier than I imagine it really was (I’m not complaining!). What made you decide to write steamy historical romance? 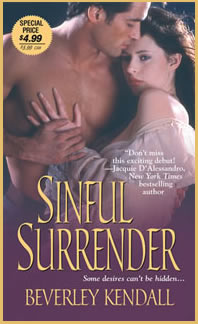 I love the historical period, especially the 19th century. It’s an easy time to romanticize despite the realities of the living conditions and the fact that women were completely oppressed. I love the formality of courting but that the hero and heroine have all this simmering passion between them. Plus, I love my romances, historical, contemporary or otherwise, pretty hot. It doesn’t have to be frequent because I really love the buildup and sexual tension, but the payoff needs to be good. 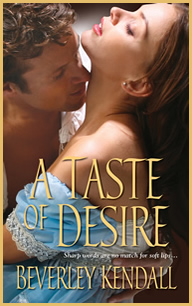 LOL. That’s a good one but a hard one. Hmm, let me think. I think I’m more like Amelia so far—although I’m really like my contemporary heroine, Rachel, in Rebound the most.

Rebound is a WIP but she’s a woman who has been betrayed but the whole experience makes her stronger, more determined. When she’s upset, she’s not one to fly off the handle but keeps her anger in until it finally explodes. She’s a fiercely loyal friend but doesn’t forgive trespasses easily. She can immediately sense insincerity in people and hates fake smiles. That’s pretty much me.

3. What’s surprised you most about being a published author?

How much work it is to promote and market a book. And how much of it is left entirely up to the author.

4. Can you tell us about your journey to indie publishing?

Well, when I didn’t sell my option book and an author friend told me how she was doing with her self-published book, I decided that was a route I wanted to go. The book I hadn’t sold, An Heir of Deception, was a book I was absolutely passionate about.

It’s my favourite and I just couldn’t let it go. Plus it was the final book in the trilogy and I felt I couldn’t just let it sit on the shelf and pray one day it would sell. I felt I really needed to get it out this year.

5. You have approximately one million friends online (give or take one or two). Over the last two years, you’ve built a tremendously successful blog and zine, which features upcoming romance and mystery releases, and reviews. How did you come up with The Season for Romance, and how did you make it so successful? C’mon, admit it—you’re a marketing goddess!

That was a combination of my sister and Kris Alice of Love Letters, a German romance magazine. On Twitter, Kris Alice was wishing there was a site listed debut authors. My sister suggested I do that. Since I didn’t think it would generate enough traffic, I decided one that would feature current and upcoming historical romances.

That’s how The Season came to be and since its inception, I’ve expanded the genres to include contemporary, paranormal, suspense and cozy mystery. I’ve recently tacked on Young Adult. The site definitely keeps me busy. 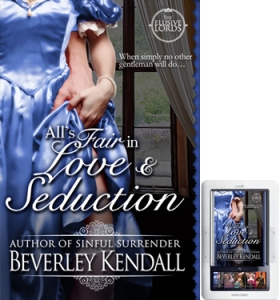 All’s Fair in Love & Seduction is part of The Elusive Lords series. It falls between A Taste of Desire and An Heir of Deception, which will be coming out late Autumn in 2011.

I love the conflict in this novella. You see the hero and heroine share a history—an unpleasant one. The problem is only one of them knows this—Elizabeth, the heroine. Derek, the hero, hasn’t a clue who she is and when he finds out…let’s just say he doesn’t take it well. Instead of saving her from certain scandal, he wants to help her along on the road to ruination.

As you can probably tell, I love a conflicted, tension-wrought road to Happily Ever After.

Here’s more about the novella:

She hopes to gain his affections

For Miss Elizabeth Smith, sharing her first kiss with the charming Lord Derek Creswell is nothing short of a dream come true…that is, until she is spotted by one of the most influential gossips of the ton. With scandal nipping at her heels, to avoid total social ruin, Elizabeth must present a fiancé by the end of the Season. But when the viscount proves reluctant, Elizabeth is forced to employ a seduction of a different sort…

He is determined to ruin her

Viscount Derek Creswell believes Elizabeth set out to trap him into marriage. After all, her sister attempted the very same thing with his brother six years before. Now the delectable Miss Smith expects a betrothal and a ring, while Derek finds her ruination infinitely more appealing…

But as Derek sets out to seduce only her body, Elizabeth is intent on claiming his jaded heart.

One person who leaves a comment will win an e-copy of Bev’s novella, All’s Fair in Love & Seduction, in one of the following formats: Kindle (mobi), ePub or PDF.

And, since this giveaway is to celebrate my husband finishing his PhD, I’m also giving the winner a copy of one of the books he wrote about in his thesis: In Country by Bobby Ann Mason.

Just leave a comment below to be entered. I’ll choose the winners on Monday, August 22, when my next guest – Louisa Edwards – will be joining me!