In nearly two years of reviewing, I’ve never given a single perfect score. Head Over Heels deserves to be the first. 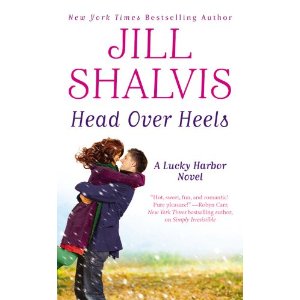 Chloe Traeger has a reputation for being Lucky Harbor’s wild child—a reputation she’s earned by saying “Screw you” to her severe asthma and living dangerously. She does extreme sports, frees dogs from notorious animal abusers…and taunts the town’s sheriff by nudging the line between legal and stupid.

Bad-boy-turned-sheriff Sawyer Thompson gets annoyed when people cross the line into stupid. But for some reason, it particularly bothers him when cute, curvy, mouthy Chloe Traeger does it. That couldn’t have anything to do with the fact he feels he has to live an exemplary life, which doesn’t come naturally to him. Nor could it be because Chloe’s condition makes it nearly impossible for her to have sex without dying.

But Sawyer’s sure tempted to explore ways of helping Chloe work up a sweat without getting herself killed.

I know there’s still over a month left in 2011, but so far Head Over Heels is my hands-down pick for best contemporary romance of the year.

It’s the third book in Jill Shalvis’ Lucky Harbor series, which so far has centered around three sisters who didn’t grow up in the same house but now are trying to run a B&B together.

Chloe, the youngest of the three, has intrigued me since book one came out over a year ago. She’s extremely clever, restless, and destined to get herself in trouble over and over. The tension between her and Sawyer has built throughout the series, and in Head Over Heels it explodes. You know the cliché “sparks fly”? Think comets colliding—that’s Chloe and Sawyer.

As brash as Chloe is, I love that Jill Shalvis gives her a tender, insecure side that she tries to hide. After a nomadic childhood with a mother who unintentionally did a lot of damage, Chloe thinks people will only love her if she changes who she is, and she’s not willing to compromise one iota of her personality to gain acceptance.

Sawyer has to be the hottest thing on two legs. His devotion to Chloe is obvious, even as she drives him mental. And the scenes where he helps Chloe figure out how to have sex without a trip to emergency room are hotter than molten lava.

I simply cannot wait until the next Lucky Harbor novel. Bring. It. On!