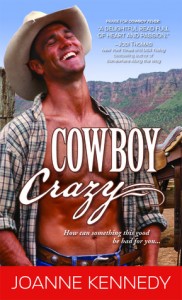 Sarah Landon escaped from tiny Two Shot, Wyoming, to go to an Ivy League school. But her sister’s hard times have brought her back – well, to a small city an hour from Two Shot. Tragedy after tragedy haunted her teenage years, and she’s traded in her spurs for heels and a suit.

Working in public relations at Carrigan Oil Company soon means that she has to relate to the public she was desperate to get away from. And it also means relating to the boss’s brother, rodeo cowboy Lane Carrigan, a rich man who’s more cowboy than most cowboys.

Lane’s brother wants to drill for oil on his ranch. But Lane’s so attached to the land he can’t stomach the thought of it being polluted or spoiled. He’s also seen what those kinds of projects do to small towns – bringing in transient workers who ruin them before leaving.

But Sarah’s determined to change his mind. In fact, her job – and her sister’s survival – depend on it.

I’ve only read one other Joanne Kennedy book (One Fine Cowboy, and I find the themes she explores really fascinating. In Cowboy Crazy, we have two characters who have fought against their own upbringings, only to discover who they really are when they’re faced with losing everything they thought they valued.

I love characters who have deep-seated secrets that they’re running away from. Sarah has rebuilt her life and strives to become a woman she thinks she should be – until Lane comes along and shows her that the only woman she should be is herself.

This is a truly touching story that will grab any reader who’s struggled to be comfortable with who they really are.

Have you read any of Joanne Kennedy’s books? What did you think?