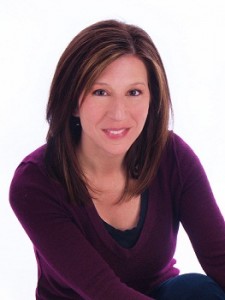 A few months after I started writing my first romance novel, way back in 2009, I stumbled across a blog that had just launched. It was written by the nominees of that year’s Golden Heart Award, and they called themselves the Ruby Slippered Sisterhood. Ever since then, their blog has been a tremendous guide as I stumbled my way to publication, and one person in particular has been an endlessly encouraging friend to me. I’m thrilled to say that her debut historical romance, When She Was Wicked, comes out tomorrow – January 29th!

Thanks, Kat! It’s wonderful to be here with you!

1. The heroine of When She Was Wicked, Miss Anabelle Honeycote (gorgeous name!), is a dressmaker. On your website you have a very cool ball gown generator, where readers can enter some info about themselves and discover what kind of gown Anabelle would create for them. Tell me, what would she make a busty brunette who would swear to her dying day that she’s really a blonde? Oh, and this client happens to be six months pregnant?

Ha! And congratulations on being enceinte! Here’s a secret: the beauty of the ball gown generator is that it doesn’t know if you’re fudging the truth. For example, it thinks I’m “willowy.” I recommend tweaking your selections till Anabelle gives you the gown of your dreams.

I’m glad you like the generator, because I had so much fun creating it. I mean, I can barely handle sewing a button onto a shirt, but virtual ball gowns? No problem!

2. Ooh, good tip. I’m going to tell Anabelle that I’m quite fit. Tell us one thing about your hero and heroine that we won’t know from reading the blurb (which is below).

Owen has several great-aunts whom he dotes on; family is everything to him.

Anabelle wears spectacles and has always felt hidden in the shadow of her younger, strikingly beautiful sister.

3. What’s your favorite moment of your journey to publication so far?

Hmm, that’s a tough question because I’ve enjoyed almost all the phases of my journey so far: typing the end on my first manuscript, finding out about my first contest final, attending my first conference. I even remember calling my mom and telling her how excited I was to get my first rejection letter—it made me feel like a real writer.

But my favorite moment has to be winning the Golden Heart. I’d sold my book while at the RWA Conference just days before, and hearing my name called at the Awards Ceremony made the whole week seem even more magical. Best of all, my cousin and critique partner, Lisa Connelly, also won a Golden Heart that night. Even now, a year and a half later, I can hardly believe it.

4. What is it about the Regency period that you’re particularly drawn to?

I’ve been hooked on historical romance—especially Regencies—ever since I read Pride and Prejudice in high school. I love the balls, house parties, and country picnics of course, but it’s more than that. Maybe it’s the fun of escaping 200 years into the past and imagining ourselves there?

I once attended a workshop where Stephanie Laurens said the Regency period is popular because it resonates with the modern audience. It was a time in history (as now) when men and women could marry for love, marry for obligation, or choose not to marry. I wish I’d thought of this answer!

5. Do you have a publication date for book #2? What can you tell us about it?

Once She Was Tempted will be out in the fall, and I’m very excited about this story. It features a wounded hero and Anabelle’s beautiful younger sister, Daphne. Everyone thought she was the sweet, innocent sister, but it turns out she has a couple scandalous secrets of her own!

If you could live anywhere in the world for one year, where would it be?

What drives you absolutely crazy?

My local library is closed for renovations…and has been for almost two years now. *sob*

What’s one thing on your must-do-before-I-die list that you haven’t done yet?

Write a sitcom or TV series!

Anne’s giving away one copy of When She Was Wicked to someone who leaves a comment here. I’ll randomly choose the winner on Tuesday February 5th. Good luck!

When She Was Wicked

SOME RULES SIMPLY BEG TO BE BROKEN 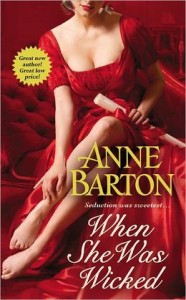 A dressmaker in London’s busiest shop, Miss Anabelle Honeycote overhears the ton’s steamiest secrets—and (occasionally) uses them to her advantage. It isn’t something she’s proud of, but the reluctant blackmailer needs the money to care for her gravely ill mother. To make up for her misdeeds, Anabelle keeps to a firm set of rules:

Her list keeps her (somewhat) honest—until she encounters Owen Sherbourne, the Duke of Huntford. Not only does Owen nip Anabelle’s extortion plans in the bud, the devilishly handsome Duke soon has the sexy seamstress dreaming of more than silks and satins. With Owen, Anabelle enjoys pleasures she never imagined…until a scandal from the past resurfaces. Now her rules could mean his family’s ruin. Owen’s searing kisses carry the promise of passion, but how will he react when Anabelle’s most devastating secret is finally revealed?