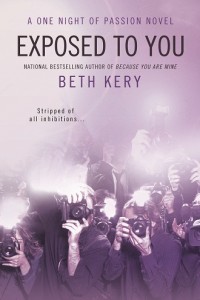 Thanks so much to Beth Kery for the interview – and to everyone who commented on it!

The very lucky winner of Exposed to You is…Suz Glo!

Didn’t win? You can find out where to buy Exposed to You here.

Everyone, this week you can win Jennifer Probst’s contemporary romance The Marriage Mistake.

Next week Julianne MacLean will be here to give away the latest in her royal series so make sure you come back!

No matter the genre, though, one thing all readers will find in Beth Kery’s books is steam—plenty of sizzlin’ hot sensuality that could warm up any chilly November night.

Hi Kat! Thank you for having me!

1. You’ve written over 40 books in several sub-genres of romance. Can you tell us about your first one? Did you know when you started that you had all of these different kinds of stories in you, or did you think you would mostly publish one type of book?

Since I started out in the epub market, I had a lot more freedom in the beginning than I do now to pick and choose what I wanted to write. It was a lot of fun to have that wide of a range of creativity. I took advantage of it, exploring different genres. As my career grew, I started getting contracts, and these specify what your next two books will be, or your next three books. It’s wonderful to know you have a ‘sure thing’ for work, but I do miss the days where I could choose a paranormal because a spooky autumn day inspired me to do so. These days, I usually write contemporary romances or erotic contemporary romances, although I still like to dabble in the paranormal now and then.

2. The heroine in Exposed to You is an art teacher who’s roped in to helping her uncle, a special effects artist. The heroine, Joy, gets very up-close-and-personal with a Hollywood star. What kind of research did you get to do around special effects for film? Did you get very hands-on (*ahem* with any actors *cough*)?

END_OF_DOCUMENT_TOKEN_TO_BE_REPLACED

Her second novel, Melt Into You just came out, and I’m thrilled that Roni’s here today to answer my nosy questions! She’s also giving away a copy of her e-novella, Still Into You, to a lucky commenter. (See below for giveaway details.)

Thanks so much, Kat. That compliment makes me really happy because that’s exactly what I’m trying to write–stories that have just as much thought, emotion, and well-formed characters as other books but with a big helping of sexy times too. : )

2. One of the things I love about your stories is that your characters are very well developed and feel authentically human. Do you know your characters pretty well before you start writing, or do you discover them as you write and rewrite?

Thanks. 🙂 It’s a little of both. I’m definitely a character-driven writer so I need to know their backstories/wounds before I start. I know much more about the characters than the plot when I first start writing a draft. They feel like real people in my head. But even so, I always discover new things about them as a write, which is fun.

END_OF_DOCUMENT_TOKEN_TO_BE_REPLACED

My latest post at The Season for Romance has some recommendations – and Bev is giving away Crash Into You by Roni Loren and Seven Day Loan by Tiffany Reisz, so you can test your boundaries (and restraints), too!