Just before I graduated from college, I started making a list of 100 things I wanted to do before I died. Sadly, I lost it (perhaps “Be more organized” should’ve been one of them), but I remember three of the items.

One of them was to visit Tintern Abbey on the Welsh/English border, which William Wordsworth wrote a poem about. And, just in case you think I’ve always been a complete nerd, let me tell you that the number one thing on my list was to have sex in a glass-bottomed Tahitian tree house. (Still not checked off, sadly.)

Smarty Pants and I spent New Year’s Eve with friends in Wales, so we took the opportunity to visit the abbey. Friends, it was well worth the ten-year wait.

The abbey was built between the 1130s and 1530s, but it fell into disrepair after Henry VIII dissolved the monasteries.

Two hundred and fifty years later, the abbey was a popular tourist destination for Georgian society. According to Wikipedia, Fanny Price from Jane Austen’s Mansfield Park had an engraving of the abbey in her sitting room (though my memory’s not good enough to recall that detail from the book).

In his Lyrical Ballads, Wordsworth published his poem “Lines written a few miles above Tintern Abbey, on revisiting the banks of the Wye during a tour, July 13, 1798”. Pithy title, huh?

Wordsworth had visited the abbey five years earlier, when he was a young man with a lot of problems. He’d left his pregnant French girlfriend in France because he didn’t have any money, and then the French revolution prevented him from going back.

The second time he visited the abbey, his life had changed. He’d met Samuel Taylor Coleridge, a fellow poet who became a close friend for decades afterward. He also visits the abbey with his sister, who became his lifelong companion.

His second visit to the abbey prompts him to write a poem, reflecting on nature’s beauty and how it has stayed with him through the five years since he first visited. He also rejoices in the pleasures of his current life, which give him hope for the future, and sees how he has changed from a young man who was “flying from something that he dreads” instead of seeking “the thing he loved”.

Here’s my favorite part of the poem.

And now, with gleams of half-extinguish’d thought,
With many recognitions dim and faint,
And somewhat of a sad perplexity,
The picture of the mind revives again:

While here I stand, not only with the sense
Of present pleasure, but with pleasing thoughts
That in this moment there is life and food
For future years. And so I dare to hope
Though changed, no doubt, from what I was, when first
I came among these hills; when like a roe
I bounded o’er the mountains, by the sides
Of the deep rivers, and the lonely streams,
Wherever nature led; more like a man
Flying from something that he dreads, than one
Who sought the thing he loved.

And the surrounding area is just as stunning.

Have you ever revisited a place several years later? How did it make you feel? What’s on your bucket list?

When I saw that one of my favorite romance bloggers, Limecello, was organizing an online fundraiser for a charity that brings fresh water to people in developing countries, I got excited. Really excited. You know what’s the best thing about it? You don’t even have to donate money if you don’t want to. All you have to do is leave a comment on her blog.

So I contacted her to ask if there was a way I could help.

For the past six years, I’ve worked for international charities as a writer and editor. I’ve been really fortunate to go to East Africa a couple of times, and I’ve seen what a huge difference it makes when people have access to clean water. I’d like to share with you some of the things I’ve seen, people I’ve met and stories I’ve heard.

In the interest of transparency, you should know that I’ve never worked for the charity Limecello is fundraising for (charity:water). The projects I’ve visited were funded and implemented by the Red Cross and UNICEF, so what I describe here are not initiatives by charity:water.

But water is water, and water is life. I hope to show you how lack of water changes life for people who don’t have easy access to it. And I really hope that this will inspire you to do something simple and FREE: leave a comment on Limecello’s blog post to help bring clean water to communities that are desperate for it.

No water, no food

If you’ve ever lived in a farming community, you’ll know how true this is. But the people I visited in northern Kenya—the Turkana—are not farmers. They’re nomadic herders.

Their families aren’t the only ones who rely on water. Their livestock do, too, and the animals were perishing for lack of water. I can’t tell you how many animal skeletons I saw scattered along the side of the road. For the Turkana to watch their livestock die is like losing their very own life. In fact, that is a very real risk.

END_OF_DOCUMENT_TOKEN_TO_BE_REPLACED

I lived a five-minute walk from the Tower of London for five years before I ever ventured inside. It’s really expensive, and I told myself I got the best of it by being able to walk past it every day on my way to work.

How wrong I was.

A couple of years ago I found out that residents of the London borough Tower Hamlets could get in for 1 pound. So Smarty Pants and I went, and we were completely blown away.

Last week I took my parents there, and though I had to pay full price this time it was still totally worth it.

The first thing hits you when you pass over the drawbridge and into the Tower complex is the size. It looks big from the outside, but you really have no idea until you get inside how huge it is. It’s a village.

And it’s so full of stories that it’s a fertile place for writers, readers and anyone with an imagination. Even the birds have a story. Legend has it that the kingdom will fall if the ravens ever leave the Tower, so the Tower is required to keep six ravens at all times. Right now they have eight, just in case.

The best part of the Tower is the tour by one of the Yeoman Warders, aka Beefeaters. They keep the Tower running. The guy who showed us around was the Ravenmaster – the ravens’ primary carer (he said, “I’m the only man in the world who can whistle and get eight birds into bed at once.”). It’s a job he can do because he lives there.

END_OF_DOCUMENT_TOKEN_TO_BE_REPLACED 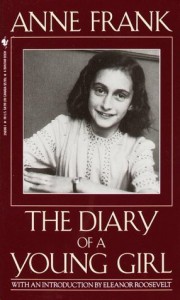 Like many people, The Diary of Anne Frank is the first book I can remember that gave me a hint of how unjust life can be and how cruel people can be.

I’ve lived in the Netherlands for ten months now, but other than going to the airport or changing trains, I’ve spent very little time in Amsterdam, where Anne Frank and her family hid for a couple of years during the war. When my parents told me they wanted to visit me and Smarty Pants, I knew immediately that it was an opportunity to visit the attic apartment that had lived in my imagination for decades.

The day started out in bizarre fashion. I hadn’t realized that it was Pride week in Amsterdam, or that the day we’d booked our tickets for was when there would be a Pride parade on boats down the canal in front of Anne Frank’s house.

We had booked our tickets to the Anne Frank Museum several days in advance (note to travelers: DO THIS. It saves you from standing in a massive line to buy tickets, and because the space inside is small they don’t seem to let everyone in at once). When we entered, we were warned not to take any photographs, so I’m afraid the only ones I can share with you are of people waiting for the Pride parade to start outside.

The apartment was above Mr. Frank’s business—a detail I’d forgotten since reading the book as a teenager. The strange thing was that when we were in the offices and storerooms—the areas the public knew about—we could hear the thumping music from outside. Very odd looking at photos of the families who hid while “It’s Raining Men” played in the background.

But once we passed through the bookcase that hid stairs up to the third floor, there was no longer any light or sound from outside. This part is at the back of the house and feels completely isolated from the rest of the world.

END_OF_DOCUMENT_TOKEN_TO_BE_REPLACED

Ten years ago today, I boarded a plane with a plan to teach English in Prague for a year before joining the Peace Corps.

Two months later, I met an incredibly funny, intelligent Brit with the sexiest voice I’d ever heard and I ditched my Peace Corps plans.

When I left California, I had no idea what the future held. I just knew that I’d never been the type of person who took chances. Throughout my high school years, I’d made every decision based on how safe it was.

By college that had started to get old, and I stretched my wings a little without letting go of my safety net.

But ten years ago today, when I stepped onto that plane, I had only a backpack, an enrollment in an English-teaching course, and a determination that I would live a more adventurous life.

I’ve learned and grown so much in the last decade. I’ve been able to travel around Europe and see places that had only lived in my imagination before – places that inspired me to become a novelist.