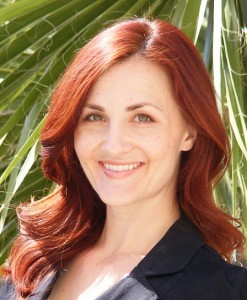 I’m so, so thrilled to introduce you to this week’s guest. Moriah Densley is a writer I’ve kept close tabs on for a couple of years – she’s my critique partner, and I consider it a huge privilege that I’ve been able to read early drafts of her novels. She writes sultry, smart historical romance and thrilling paranormal romance. Her stories grab at my heart and hold on tight till the end, staying with me long after I’ve finished reading them.

And I’m so pleased to introduce her to you because her debut novel, SONG FOR SOPHIA, is being released TODAY so now the rest of the world can see how brilliant she is!

She’s giving away a digital copy of SONG FOR SOPHIA to one lucky commenter. But first, welcome Moriah!

Hi Kat! *blowing a kiss* I love your blog, and as the president of your fan club, you can only imagine how exciting this is for me. Thanks for the nice intro. I’m blushing.

1. I always love hearing about how debut authors got started writing. What made you decide to sit down one day and write a romance? 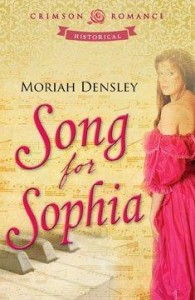 Oh, it’s so stereotypical, I’m embarrassed to tell. I dreamed the library scene where Wilhelm calls the bluff on Sophia’s housemaid charade. He seemed dangerous and mesmerizing, and she gave him attitude despite being frightened half to death.

The characters in my head wouldn’t shut up, and I figured I’d finally gone crazy. It didn’t occur to me that I had the hero and heroine of a romance novel. I’m a violin teacher. My most recent writing experience was a research paper on Bach’s organ fugues. When I finally decided to write―just that one scene―it was scary. I felt exposed and ridiculous. That feeling didn’t last long, though.

One month and 140K words later, I had a completed draft. It was hideous. By then I’d realized A) I was addicted to writing, and B) I’d better learn some craft. Writers and agents are a generous bunch, and I read advice they posted on blogs and forums. I devoured everything I could find on the internet about publishing. I read like the world was coming to an end, probably 150 books a year by authors I admired. I found a critique group and beta readers who gave me both the criticism and encouragement I needed. I hope these people see the dedication page of my book; they’ve helped me come a long way.

2. Ooh…I’m intrigued! One of the many (many) things I love about you is that you’re full of qualities that – on the surface – seem like contradictions: classical violinist and gun enthusiast, for example. And your wide range of interests comes out in your historicals and paranormals. Do you think you could ever settle for one genre, or will you always search for new ways to tell your stories?

Why thank you. Kind of you not to mention how I proclaim myself a “fitness junkie” yet stuff my face with chocolate every chance I get.

I love self-serve frozen yogurt, where I mix half a dozen flavors with yet more toppings―a blend that looks like something you’d scrape out of your tire well. I could no sooner choose one romance genre than one flavor. Can’t even guarantee I’ll stay in fiction. I’d like to simply follow ideas and opportunities. Don’t tell my other babies, but just between us girls, historical is my favorite.

3. SONG FOR SOPHIA is a Golden Heart finalist this year – congratulations! How did you celebrate when you got the call, and what has been the most surprising thing about being a finalist?.

My historical is a bit unconventional, and I had a hard time finding a home for it. I entered the contest on a whim and forgot about it, so on March 26th when I got a call from Texas, I thought it was my friend in Houston. Imagine my surprise to hear Julia London on the line. She had good news, and I was shocked. Being a GH finalist is an honor, of course, but the most meaningful aspect to me was that 5 out of 5 judges read it and liked it. The encouragement came at a time I was considering giving up.

After the phone call, I think I behaved somewhat like an orangutan on caffeine. My kids came to see what had caught fire. They thought I’d won Best Writer in the Whole World Award, and I let them think so. It took a few days for the high to wear off before I quit being obnoxiously giddy.

Surprising? The sincere camaraderie amongst the GH finalists was not surprising to me. Writers are nice people. We’ve had a great time preparing for the national RWA conference in July. What I didn’t expect was the dozen or so emails from agents and editors interested in my super-cool manuscript which had been too [fill in the fault] when they rejected it a few months prior. I was not smug, no not at all.

4. The hero of SONG FOR SOPHIA, Wilhelm Montegue, is a hero with issues. Today he would be diagnosed as an autistic savant – a brilliant man who has trouble gauging emotional cues. He’s absolutely devoted to his heroine, but he’s also not an easy man to live with. He reminds me of Jervaulx in Laura Kinsale’s Flowers from the Storm (though obviously their conditions are different). Was this a difficult story for you to write? What inspired you?

He lives a precarious life. An autistic savant with a photographic memory and a talent for mathematics and music, he was exploited by the army during the Crimean War as a spy and assassin before being captured and tortured by the Russians. He has PTSD on top of the autism―he’s a mess.

Wilhelm lives secluded in the country where he can indulge his brilliant madness, but he makes enemies when he takes up Sophia’s cause. By protecting her, he makes himself vulnerable―it wouldn’t be difficult to have him committed to an asylum.

Not only is his freedom at stake, but he so badly wants to win over Sophia and doesn’t know how. His genius brain can’t comprehend social complexities such as diplomacy. It was a bit painful as an author to make a character so earnest yet so flawed. Nothing comes easily to him, and he feels failure very keenly. While he is aware of the opposing forces in his brain, he can’t control them.

Although Wilhelm is the most intellectually complex character I’ve ever written―I spent months researching savant syndrome, synesthesia, mathematics, literature, music, and military history―his motives are simple: He wants Sophia to be happy. He’ll do anything to save her, and he’ll blur legal or moral lines to do it. That brings us back to making enemies . . .

5. Your first paranormal romance, THE VALKYRIE’S GUARDIAN, is also coming out this year. It features a hot kilt-wearing superhero and the feisty woman he’s sworn to protect. What three words would you use to describe your paranormal voice and your historical voice?

Me? Confined to three words? Oh dear, let me haul out the thesaurus. *blows dust off*
Paranormal: Wacky, intrepid, passionate.
Historical: Wry, intellectual, lush.
(That’s if I get it right.)

Comparing the two voices, oddly, historical prose and dialogue comes far more naturally. Chalk it up to years of research and owning every period piece ever made on DVD. Often when writing paranormal, I edit to make the dialogue more direct and punchy. I have to remind myself, “Navy SEALs don’t say perhaps.”

Moriah’s giving away a digital copy of SONG FOR SOPHIA to one person who leaves a comment here. I’ll randomly choose a winner on Tuesday June 11th.

And if you can’t wait that long, you can buy it on Amazon and Barnes & Noble.

Moriah Densley sees nothing odd at all about keeping both a violin case and a range bag stuffed with pistols in the back seat of her car. They hold up the stack of books in the middle, of course. She enjoys writing about Victorians, assassins, and geeks. Her muses are summoned by the smell of chocolate, usually at odd hours of the night. By day her alter ego is your friendly neighborhood music teacher. Moriah lives in Las Vegas with her husband and four children.

Visit moriahdensley.com for teasers and sample chapters, and humorous blog articles on life as a writer. See reader reviews on Goodreads.com. Connect on Facebook, Twitter, or Pinterest. I love hearing from readers!